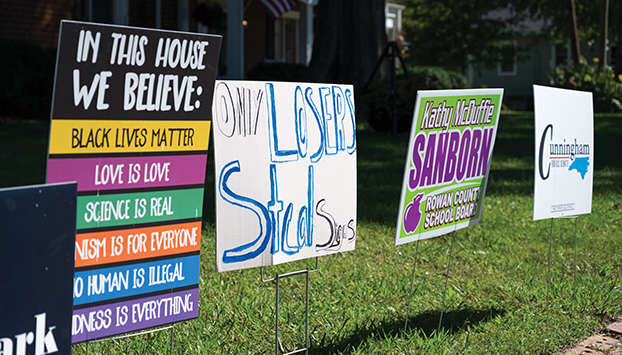 Josh Bergeron / Salisbury Post - Signs in front of one house in the Fulton Heights neighborhood, where there have been a rash of sign thefts, proclaims that only losers steal other people’s signs.

SALISBURY — Though local law enforcement say they haven’t heard many reports, locals are reporting that dozens of political signs are being stolen throughout the community.

“Stealing signs is not an appropriate way to express concern about election outcomes,” Hoy said. “It’s against the law, and it’s most uncivil.”

Hoy added that about a dozen locals have visited the county Democratic headquarters, located at 1504 W. Innes St., and reported that their signs have been stolen. Some have shown up for weeks in a row reporting stolen signs, he said.

“You’re not supposed to steal things that don’t belong to you,” Post said.

This isn’t the first election where Post has had political signs stolen from his yard, but he said this is the first time it’s happened so quickly after posting the sign.

He recently began putting substances on the signs, such as vaseline, glitter and honey, in hopes of attracting bugs so they’ll “be sorry that they took my sign” once they’re in their car, he said.

Post said he contacted the Salisbury Police about the issue, adding that he was told the police department has received multiple phone calls.

But Lt. Lee Walker, spokesperson for Salisbury Police, said only one report has been filed.

Capt. John Sifford at the Rowan County Sheriff’s Office said the office has not yet received a report of stolen political signs. 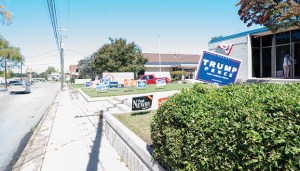 Ronnie Smith, a philanthropist and Republican, said he had nine political signs stolen in 2016 and has three stolen so far during this election. Smith said he contacted police about the issue and reported 13 other locations in Salisbury that had signs stolen as well.

He added that some locals have told him they’ve received threatening letters in the mail.

“It’s upset a lot of people in Salisbury,” Smith said. “If this does not stop, it could get worse.”

If anyone expresses a physical threat related to political signs, Walker said the person can be charged with misdemeanor communicating threats, which is also a class 1 misdemeanor.

“It seems like we can’t go through the election process without someone feeling they have to exert some sort of pressure,” said Don Vick, chair of the Rowan County Republican Party. “It’s a sad state of affairs.” 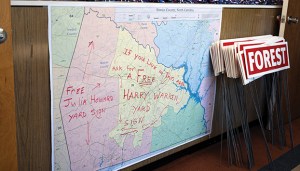 Josh Bergeron / Salisbury Post – This map at the front of the Rowan County Republican headquarters shows visitors which sign they should ask for in the county’s legislative races. The yellow area is a district in which Rep. Harry Warren is seeking re-election. The pink area is where Rep. Julia Howard is seeking re-election. In green, the 67th District, Rep. Wayne Sasser does not have competition.

Vick recalled one local who purchased two Trump signs one morning only to return for more after they were stolen the same day.

Of the nearly 1,000 Trump signs given out to the local community, Vick said he’s been told about 100 of them have been stolen. Republicans at the county party headquarters, located at 612 W. Innes St., now bring the Trump sign inside each night so it won’t be stolen.

“I realize we’re in an election year and we hopefully will respect each person’s opinion,” Smith said.