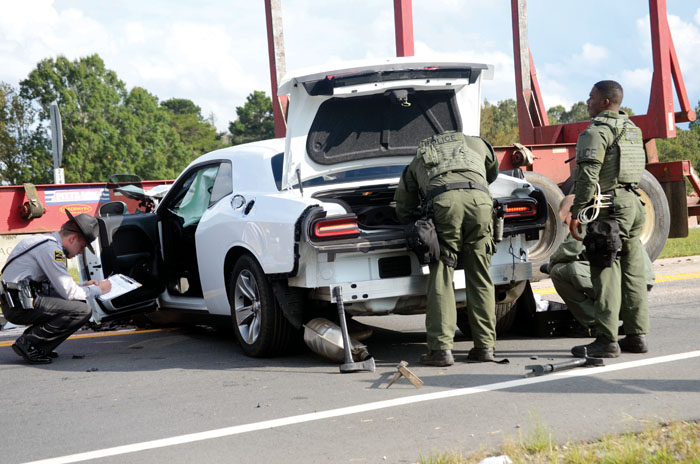 Salisbury police investigators check this Dodge Challenger after the driver took them on a high-speed chase and then collided with this lumber truck. Photo by Shavonne Potts, Salisbury Post.

SALISBURY — Police investigators are working to determine the identity of a man who took them on a high-speed chase that ended in a collision with a lumber truck at the intersection of Stokes Ferry and Liberty roads.

The incident began Monday just before 4 p.m. at Newsome Road when the driver failed to stop for a stop sign. The driver, traveling in a white Dodge Challenger, continued on Stokes Ferry Road reaching speeds of 100 mph, said Sgt. Adam Bouk.

The Dodge Challenger came to a stop in the roadway and the driver complained of injuries. After complaining about injuries, he was checked at the scene by a medic and arrested. An officer popped open the trunk of the car to find a suitcase inside. They searched the vehicle and found marijuana inside, Bouk said.

The truck did not have a load of lumber and needed to be hauled away from the scene. The Dodge also had to be towed from the crash scene.

The name given to officers by the driver of the Dodge did not match the name registered to the vehicle, Bouk said.

He faces fleeing to elude arrest, possession of marijuana and traffic-related offenses, including failure to stop for a stop sign. Members of West Liberty Volunteer Fire Department helped block the roadway, which was obstructed by the collision.

Rowan County resident Adam Kenerly had just left nearby Morgan Elementary School and was riding his motorcycle behind the lumber truck when the crash occurred. He stopped to check on the driver of the Dodge after the crash.

Kenerly said he didn’t know the driver was involved in a high-speed chase but quickly realized it when police pulled up.

The Highway Patrol also arrived at the scene to investigate the collision. Deputies with the Rowan County Sheriff’s Office were nearby and also responded to assist.