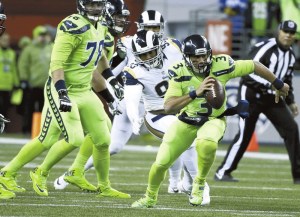 ATLANTA (AP) — The Falcons suffered their second straight fourth-quarter collapse after leading by two touchdowns, this time to backup quarterback Nick Foles and the Chicago Bears, who rallied from a 16-point deficit for a 30-26 win on Sunday that could spell the end for Atlanta coach Dan Quinn.

Foles replaced Mitchell Trubisky and threw three touchdown passes in the fourth quarter for the Bears, who improved to 3-0 for the first time since 2013.

The Falcons (0-3) became the first team in NFL history lose back-to-back games in which it led by 15 or more points in the final period, according to STATS.

A week ago, Atlanta became a national laughingstock after failing to pounce on an onside kick, allowing the Dallas Cowboys to finish off their comeback from a 39-24 deficit to win 40-39 on a field goal as time expired.

Under Quinn, the Falcons also blew a 28-3 lead in the Super Bowl after the 2016 season and lost in overtime to the New England Patriots.

This time, it was Foles who guided the improbable comeback after relieving the erratic Trubisky in the third quarter. The former Super Bowl MVP had two apparent touchdown passes overturned by official reviews — and still managed to pull out the victory.

After the Falcons went three-and-out on their third straight possession, Foles heaved one with a rusher in his face and connected with Anthony Miller for a 28-yard touchdown with 1:53 remaining.

SEATTLE (AP) — DK Metcalf made up for a huge first-half blunder by catching a 29-yard touchdown pass from Russell Wilson with 1:47 remaining, and Seattle held off Dallas.

Metcalf appeared to have a walk-in touchdown after hauling in a deep pass from Wilson late in the first quarter. But he was careless with the ball in the final few steps before the goal line, and Dallas cornerback Trevon Diggs came up from behind and knocked the ball free. It went out of the end zone for a touchback.

But when Seattle needed a big play late, Wilson floated a pass into the end zone and allowed Metcalf to run underneath it for the deciding touchdown.

Wilson was 27 of 40 for 315 yards. His latest bit of fourth-quarter magic ruined Dak Prescott’s attempt at a second straight major comeback.

Dallas trailed 30-15 after Prescott fumbled on the first play of the second half and Wilson subsequently threw his fourth TD pass. But Prescott threw TD passes of 42 yards to Cedrick Wilson and 43 yards to Michael Gallup, and Greg Zuerlein’s 42-yard field goal with 4:03 left gave Dallas a 31-30 lead.

Prescott finished 37 of 57 for 472 yards, with three touchdowns and two interceptions.

The Rams (2-1) were poised to match the third-largest comeback in NFL regular season history after Jared Goff led the team to touchdowns on four straight drives, capped by Darrell Henderson’s 1-yard run with 4:30 remaining.

Allen responded by marching the Bills (3-0) on an 11-play, 75-yard drive, which was extended by a pass interference penalty against Darious Williams on fourth-and-7 from the Rams 12. Williams interfered with intended receiver Gabriel Davis at the 3.

One play later, Allen rolled to his left and lobbed a pass over a Rams defender. Kroft made a leaping catch and secured the ball before tumbling to the ground, his second TD of the game.

Allen finished with four touchdown passes and scored on a 1-yard run. The third-year starter, however, contributed to the Rams’ comeback bid, with an interception and a lost fumble leading to Los Angeles touchdown drives.

Allen Lazard caught six passes for 146 yards for Green Bay (3-0), including gains of 48 and 72 yards on throws deep downfield that each set up touchdowns.

Saints running back Alvin Kamara built on a sensational start to the season, gaining 197 yards from scrimmage and scoring twice on short passes from Drew Brees, with shifty, tackle-slipping runs after the catch.

Brees completed 29 of 36 passes for 288 yards and three TDs. Emmanuel Sanders caught a 10-yard scoring pass at the end of the first half that gave the Saints a 17-13 lead.

PHILADELPHIA (AP) — Joe Burrow tossed a pair of touchdown passes to Tee Higgins in regulation and Carson Wentz dove into the end zone for the tying score in the final minute as Cincinnati and Philadelphia played to a tie.

Philadelphia’s Jake Elliott lined up for a 59-yard field goal with 19 seconds left in overtime, but a false start on Matt Pryor forced the Eagles to punt it away and play for the tie.

Facing an 0-3 start for the first time since 1999, Wentz drove the Eagles 75 yards in the final three minutes. He barreled 9 yards on third-and-6 to the Bengals 19 and then ran in from 7 with a head-first dive into the end zone. Elliott’s extra point tied it with 21 seconds left.

Neither team could do anything in overtime.

Burrow, the Heisman Trophy winner and No. 1 overall pick, calmly picked apart the secondary in the second half, completing 31 of 44 for 312 yards. He’s still seeking his first win since leading LSU to the national championship in January.

MINNEAPOLIS (AP) — Stephen Gostkowski made his career-high sixth field goal of game, a 55-yarder with 1:48 left that lifted undefeated Tennessee past Minnesota.

Derrick Henry rushed for 119 yards and two third-quarter touchdowns for the Titans, who improved to 3-0 for the first time since 2008 after trailing for most of the game. Ryan Tannehill passed for 321 yards, guiding the Titans on a go-ahead drive in the fourth quarter or overtime for the sixth time in 16 games since becoming the starter.

The Titans are 12-4 behind Tannehill, including the playoffs, and they’re 15-0 when Henry hits the 100-yard mark.

Dalvin Cook rushed for a career-high 181 yards and a score for the Vikings, who are 0-3 for the first time since 2013. Kirk Cousins threw for 251 yards and three touchdowns, hitting Kyle Rudolph for a one-handed, toe-tapping grab in the back of the end zone for a 30-25 lead with 10:22 left.

The depleted Vikings defense didn’t do enough to hold it, though, as Tannehill moved the Titans just close enough for Gostkowski to go to work. The last three of his makes were all from 50-plus yards.

The Vikings, who were outscored 37-13 in the first half over their first two games, had 464 yards by an offense that finally got going.

DENVER (AP) — Tom Brady threw three touchdown passes and Shaq Barrett celebrated his homecoming with a pair of sacks, one for a safety, in Tampa Bay’s 28-10 victory over Denver.

With his first road win for the Bucs (2-1), Brady evened his career record against the Broncos at 9-9 with just his fifth win in a dozen trips to Denver.

The Broncos (0-3) completed a second straight winless September under head coach Vic Fangio, who donned a face shield after getting fined $100,000 for failing to wear a mask last week.

Barrett, who led the league last year with 19½ sacks in his first season in Tampa, picked up his first sacks of this season in the city where he played from 2014-18 after starring at Colorado State.

His second sack of Jeff Driskel, who started in place of Drew Lock, came in the end zone for a safety that pushed the Bucs’ lead to 25-10.

With his full complement of receivers finally available, Brady looked like the methodical QB he was for two decades in New England, driving the Buccaneers to scores on four of five first-half possessions.

EAST RUTHERFORD, N.J. (AP) — Nick Mullens threw for 343 yards and a touchdown to lead San Francisco to its second win at MetLife Stadium in as many weeks, this time over the error-prone and winless New York Giants.

Jerick McKinnon, Brandon Aiyuk and Jeff Wilson scored on runs on a nearly flawless day for the Niners (2-1), who stayed in West Virginia to prep for the game. Robbie Gould added three field goals for San Francisco, which last week beat the Jets 31-13 and denied Giants coach Joe Judge a chance for his first win this week.

The Niners had quarterback Jimmy Garoppolo (ankle), defensive linemen Nick Bosa and Solomon Thomas (knees) and running backs Raheem Mostert and Tevin Coleman hurt against the Jets. They complained about the stadium’s new turf after the game, saying it was “sticky” and led to injuries.

The Niners’ play on Sunday made it a non-issue as Mullens hit 25 for 36 passes and finished with a rating of 108.9. San Francisco outgained New York 420-231, held the ball for 39:44 and forced three turnovers without giving the ball up.

PITTSBURGH (AP) — James Conner ran for 109 yards and the go-ahead touchdown midway through the fourth quarter as Pittsburgh rallied past Houston.

The Steelers improved to 3-0 for the first time in a decade by putting the clamps on the Texans (0-3) in the second half. Houston managed just 51 yards and two first downs after halftime as an early 11-point lead vanished.

Houston started with the same mark in 2018 and rallied to win the AFC South.

The game turned early in the fourth quarter when DeShaun Watson threw into double coverage deep in Pittsburgh territory with the Texans leading 21-20. Nickelback Mike Hilton picked it off. Pittsburgh put together a 12-play, 79-yard drive, with Conner covering the last 12 to give the Steelers the lead with 6:24 to go.

Pittsburgh’s defense then forced its third three-and-out of the second half and Conner did most of the rest as the Steelers chewed up the last 4:47 to ice it.

Ben Roethlisberger threw for 237 yards and two touchdowns in his franchise-record 221st appearance.

Belichick joined George Halas (318) and Don Shula (328) as the only coaches to reach the milestone.

Cam Newton was 17 of 28 passing for 162 yards, a touchdown and an interception. Shilique Calhoun had two forced fumbles and Deatrich Wise Jr. had a fumble recovery for a score.

The Patriots have won the last six meetings with the Raiders and improved to 47-9 in regular-season games following a loss. Raiders coach Jon Gruden dropped to 0-3 against Belichick.

Derek Carr finished 24 of 32 for 261 yards and a two TDs for Las Vegas. But he had two fumbles which led to a New England field goal and a late touchdown when he lost the ball in the end zone and it was recovered by Calhoun.

Stafford had a deep completion called back by a holding penalty before he calmly led the Lions downfield, Prater connected on his fourth field goal of the afternoon and the Lions finally got to celebrate a victory.

Arizona’s Kyler Murray threw for 270 yards and two touchdowns and ran for a score, but he also had three interceptions. DeAndre Hopkins caught 10 passes for 137 yards and Andy Isabella had two TD receptions.

Arizona (2-1) pushed ahead 23-20 near the end of the third quarter when Murray connected with Isabella from 4 yards out for the pair’s second score.

With their second straight win under first-year coach Kevin Stefanski, the Browns are 2-1 for the first time since 2011. It’s also the first time they’ve had a winning record since Week 14 in 2014.

Young, the No. 2 overall pick in this year’s draft, left in the second quarter with his injury.

Chubb finished with 108 yards on 19 carries.

INDIANAPOLIS (AP) — Xavier Rhodes and T.J. Carrie each returned an interception for a touchdown, Indianapolis recorded its second safety in as many weeks and Philip Rivers added his 400th career TD pass as Indianapolis routed New York.

Rivers played like his old self, getting rid of the ball quickly while avoiding mistakes on a milestone day.

And with the help of a suddenly high-scoring defense, Rivers & Co. made it look easy against the winless Jets. New York is 0-3 for the second consecutive season under coach Adam Gase.