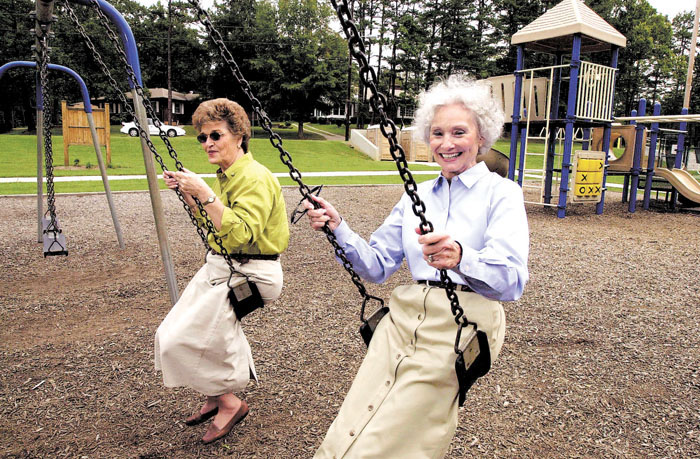 Salisbury Post file photo Dot Miller and Peggy Smith worked for decades together in City recreational programs. A playground a city park is named for them. They are pictured here swinging in City Park in 2002.

Dot Miller and Peggy Smith retired nearly 18 years ago from the Salisbury Parks and Recreation Department, but the duo’s legacy lives on just a short walk away from where they spent years putting together programs for young children.

Miller’s and Smith’s names are pictured on a sign off of West Miller Street that names the structures behind it “Miss Dot and Miss Peggy’s Playground.” A reader asked for more information about people behind the names on the sign.

Miller, whose first name was Doris, worked in the Parks and Recreation Department as the playschool director for 30 years. She and Smith were good friends. By the time the two retired in 2002, they had known each other for about 50 years and worked for the city for 36 of those.

Miller passed away in 2019. Smith still lives in Salisbury, at Trinity Oaks, according to staff at the facility.

In a 2002 article, Post writer Mark Wineka wrote that the two women were not considered city employees for about 12 years prior to 1966. They scrimped by on whatever money was left after their minimum charges. Parents paid $1.50 a day or about $4.50 per week. Classes were limited to 30 children and there were waiting lists, different mornings for different children and about 90 served per week.

The programs also included stories, crafts, music, art, a play kitchen toward the back of the center, trips to the playground and dress-up days for Halloween and Thanksgiving. There were even “Turkey Parades” down the hall of the City Park Recreation Center.

The preschool closed in June 1993 because of declining enrollment, rising costs and the emergence of private preschools. The two friends were effectively split up when they were reassigned to customer service duties at the Civic Center. One worked in the morning. The other was on duty in the afternoon. They called the transition each day “the changing of the guard,” Wineka wrote in 2002.

At their retirements, both had 36 years of service, according to Salisbury City Council meeting minutes.

The Parks and Recreation Department started the effort to raise $15,000 to pay for a new playground structure and the dedication. The department’s goal was to hold an event around the time of Smith’s and Miller’s retirement. Gordon and Carolyn Hurley were the first donors, giving $1,000 to the cause.

In 2000, the Rowan County Parks Department also dedicated a playground at Sloan Park to Smith.