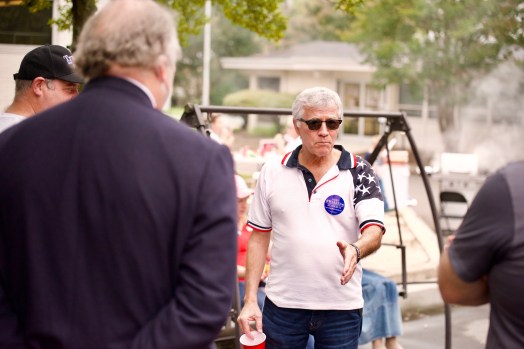 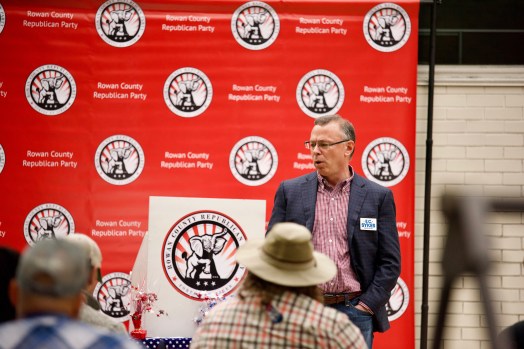 Carl Blankenship/Salisbury Post - E.C. Sykes is a businessman and the Republican nominee for N.C. Secretary of State. 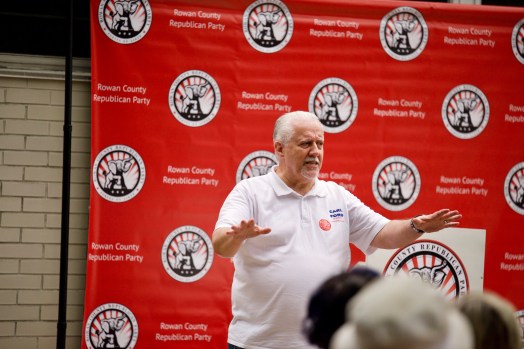 SALISBURY — Election day is approaching in November, and the local Republican Party rallied candidates and voters Saturday for an annual meet-and-greet.

In addition to few dozens people, there were a number of candidates who attended, ranging from judges to Republican Secretary of State nominee E.C. Sykes. Attendees ate lunch and heard speeches from candidates in attendance.

Sykes said the lunch was one of three local events he attended Saturday. He said local events are important for his campaign because he’s a political outsider and is working to get his name and platform to voters.

One point echoed by many of the candidates was the importance of voting the entire ballot. Straight-ballot voting, or picking all candidates registered to one party, is no longer allowed in North Carolina. So, a voter has to fill out their choice of candidate in each race, and the races are many — from federal and state positions to local people who represent the community in the legislature, local government and the judiciary.

State Rep. Harry Warren, R-76, said he can smell victory in his re-election bid. Warren said being a senior member in the House puts Rowan County in a strong position.

“And that’s where we want to stay,” Warren said.

Warren said he’s seen gun control and monument-related bills show up in the legislature and raised the specter of those items being passed into law if Democrats take control.

“It’s not hard to find out what life would be like under a Democrat majority,” Warren said, adding it is important for the party to maintain its majorities in the House and the Senate.

And he stressed that all the races on the ballot are important.

State Senator Carl Ford, R-33, cautioned the crowd, saying he would have never believed until recently Republicans could lose super-majorities in the state House and Senate. The threat of losing majorities in the bodies is real, Ford said.

This is the most important election of his lifetime, Ford said, and he said there’s no excuse for not voting with the number of early voting opportunities available.

“We need your help,” Ford said.

District 22B Judge April Wood, who is running for a position on the N.C. Court of Appeals, made an appearance and told attendees appellate judge candidates are on ballots statewide.

“If you want true fairness in the court, you want conservative judges,” Wood said. “They’re going to uphold the constitution, they’re going to apply the laws as written and not make them what they want to be.”

Outside of events like Saturday’s local Republicans are hard at work trying to reach local voters, party Chair Don Vick said. The county’s Young Republicans group, in particularly, are one of the top in the state for knocking on doors, Vick said.

COVID-19 delayed the party getting yard signs somewhat. He also there have been many thefts of Trump campaign signs.

“We’re not quite sure why,” Vick said.

Davis Brown, a party member at the lunch, said he votes Republican about 90% of the time and he wants to see Donald Trump reelected president. Brown said he is a professor of political science and that his political opinions are unpopular in his in circles.

“I do think that much of the media and much of the Democratic Party has pretty badly distorted what he stands for and what Republicans stand for,” Brown said.

Elaine Hewitt, a member of the local party’s executive committee, said she is thankful for Trump’s impact on the economy.

“His personality may be strange, but he gets results,” Hewitt said.

Hewitt said she is concerned with the popularity of socialist policies and violence in democratically controlled cities.

Vick said the local party wants to teach people about what the party stands for.

“I’ve paid into things like social security all my life, and now they’re taking care of me,” Vick said. “The Democrats would like us to be doing more for people who really haven’t paid into anything, they want free this, free that. We’re a country of working people, and I think the more we’re able to give back to the workers, the better off we are.”

Vick said he thinks Republicans are more down-to-earth in their beliefs and reiterated he wants to see people get out to vote and vote down the entire ballot.