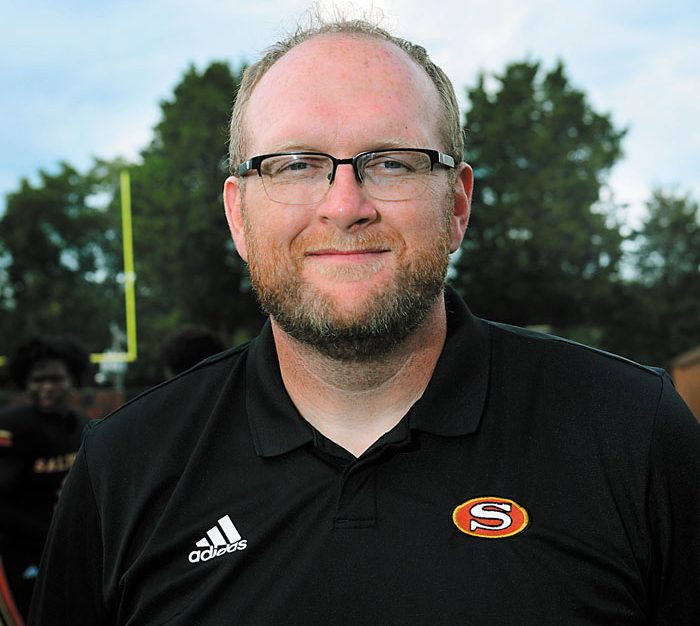 On Friday, the former Catawba College All-American was appointed as the school’s new athletic director. He’ll be a busy man when sports get started in November.

Hinson announced Salisbury’s football schedule that will begin on Feb. 26.

The Central Carolina Conference in which Salisbury competes is a 10-team league. When the NCHSAA (which governs 421 public schools) mandated a seven-game regular season for this winter and spring, that created interesting scenarios.

Salisbury will play one non-conference game (West Rowan, at home) and six games against CCC foes. The CCC opponents will be Oak Grove, Lexington, North Davidson, Central Davidson, Ledford and South Rowan, which means the Hornets won’t be taking on West Davidson, Thomasville or East Davidson.

Salisbury’s CCC home games are against Oak Grove, North Davidson and Ledford. Oak Grove was the CCC regular-season champ in 2019, while Ledford and North Davidson also were among the top teams.

There’s no game versus North Rowan for the first time since 1964.

The Hornets are working out three times a week — Monday, Tuesday and Thursday.

North is open on April 2 at this point. Pearson said that void might be filled, but that’s yet to be determined.

The Cavaliers start at North Moore on Feb. 26.

The first home game is on March 12 against Albemarle.

North Rowan’s only other scheduled home game is North Stanly on March 26.

The Cavaliers are working out (in two groups) twice a week.

LANDIS — South Rowan is conducting the most workouts of any football team in the county.

The Raiders are working out four times a week. They take Wednesdays off.

South hosts Carson in a non-conference game on Feb. 26 to get things started. Carson has won the last three meetings.

South’s other six games are against CCC opponents.

After that opener at South Rowan on Feb. 26, the Cougars will play Mount Pleasant at home in another non-conference game.

East Rowan and South Iredell (to end the regular season) are the NPC home games for the Cougars.

Carson is working out two times a week.

“The guys are doing a good job with it,” East coach John Fitz said. “Some guys would like to work out more, and that’s a good thing. No one is saying they don’t want to be out there.”

Fitz isn’t disappointed in the seven-game regular season because for a while there any season at all was iffy.

East’s two non-conference games are at Mount Pleasant and at home against West Stanly. The Mustangs split with those teams last year.

Then East will take on its five NPC opponents.

MOUNT ULLA — West Rowan coach Louis Kraft is excited about finally getting the green light to get in the weight room.

The limit at any one time is 25 Falcons.

West has three workouts per week for players who don’t have a weightlifting class and two for players that do.

West’s football schedule has been available for a while.

Besides that exciting opener at Salisbury — West hasn’t clashed with the Hornets since  2014 — the Falcons will take on Davie County and their five NPC foes.

“Everybody’s in the same boat, nobody had spring ball,” Hampton told Myhorrynews.com. “Different school systems had different regulations as far as what they could do in the summer, but at the end of the day, we’re accountable for having the kids ready, and offensively, we weren’t there tonight.”

Midfield, Alabama, has shut down its season due to COVID-19 concerns.

LaGrange High in Lake Charles, La., shut down, not because of COVID-19, but due to damage from Hurricane Laura.

With South Carolina joining the fun on Friday, public schools in 29 states are now playing football.

Arizona is scheduled to be the 30th state to get the green light on Sept. 30.

Six more states are scheduled to kick off in October. One of those is Colorado, which gave schools a choice of fall or spring football. Most opted for fall.

Some private schools played in North Carolina on Friday.

The Cabarrus Warriors, a team that combines players from Cannon School and Concord Academy, won 21-14 against North Raleigh Christian Academy.

There’s a lot of new stuff going on for everyone.

Basketball will come before football this school year, and the basketball playoffs are scheduled to run through March 6.

Potentially, that could impact a number of players and teams.

Patterson steps up, leads No. 20 Hokies past NC…