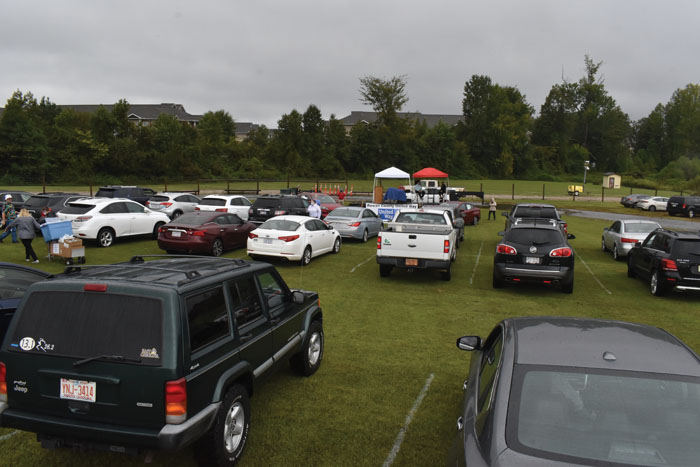 In order to abide by social distancing guidelines, this year's United Way campaign kickoff was held as a drive-in event. Ben Stansell/Salisbury Post

SALISBURY — A chorus of car horn honks filled the air at the Rowan County Fairgrounds Friday afternoon as the Rowan County United Way unveiled its goal and progress early in the 2020 fundraising campaign.

The United Way announced that it is seeking to raise $1.5 million that will be distributed to 19 community investment partners who provide services in substance abuse, mental health, healthy lifestyles and basic needs to residents of Rowan County.

The United Way announced its goal at a kickoff event that was into a drive-in celebration in order to comply with social distancing practices.

Like a drive-in movie, cars lined up at the fairgrounds and tuned into FM station 88.3 to listen to an on air program hosted by Lee and Andrew Smith, the campaign’s chairman and the Rowan-Salisbury Schools assistant superintendent of transformation. The duo hosted the event with support from Eric Slipp, the campaign’s public relations chair, underneath tents at the front of the field. 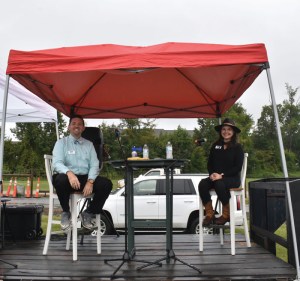 Lee and Smith hosted the event as if it was a rowdy morning talk show and went by the nicknames “Jenny from the block” and “Dr. Drew.” Instead of applause, cars beeped their horns to show support throughout the kickoff. Raffles for prizes were held in between informational announcements and members of the campaign cabinet took to the stage to report on the state of their fundraising efforts. To conclude the kickoff, Lee announced that the campaign is already 24.6% to its goal, having raised $368,937 so far.

“We’re right on target actually,” Lee said. “It’s all about making sure we’re getting people involved early on because we know what this climate is right like now, we’re a bit acclimated, but we don’t know what it’s going to be like in a couple months. We want to give everybody an opportunity to participate.”

The kickoff event was originally planned for last week, but was postponed due to concerns over weather brought on by remnants of Hurricane Sally.

Still, the United Way couldn’t avoid the showers as remnants of Tropical Depression Beta brought a drizzle down upon the event. Despite the wet weather, the kickoff was well attended and had rows of cars lined up. Todd Rakes, an automobile sponsor for the campaign from Ben Mynatt Nissan, was in attendance and said he was glad to see that the United Way persisted through challenges and still held the event.

“This is a year of different times,” Rakes said. “I appreciate their determination to still make sure something happens.”

Lee said that she was pleased with the turnout for the kickoff event.

“For the circumstances that all of us have been placed under, I think it went about as well as it possibly could,” Lee said. “We had an extraordinary turnout and it just shows that people, no matter what, have a desire to take care of those in our community. They come out in the middle of the rain and the mud and support the efforts of the United Way.”

The campaign will have several more weeks before it concludes on Friday, Nov. 13.