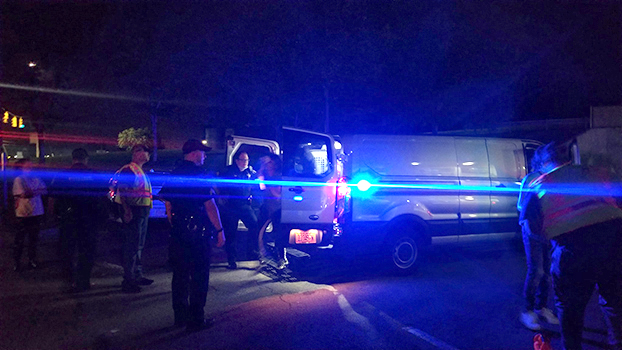 Carl Blankenship / Salisbury Post - Law enforcement drop of juveniles at a Walgreens parking lot in China Grove after a shooting at Reaper's Realm.

CHINA GROVE — One person was shot in the foot and five juveniles were taken into custody after a shooting Saturday night at Reaper’s Realm, where there were more than 1,000 people present, according to the Rowan County Sheriff’s Office.

While details about the start of the incident remained unclear early Sunday, the Sheriff’s Office said a male from the Charlotte area brought himself to Atrium Health Carolinas Medical Center after leaving the scene and realizing he’d been shot. The person was treated and released.

Meanwhile, five people under the age of 18 will face charges in the juvenile court system in connection with the incident, the Sheriff’s Office said. Deputies seized three handguns from the scene.

The Sheriff’s Office said in a news release a shots fired call came in at about 8:25 p.m. Saturday. Once at Reaper’s Realm, deputies found a large crowd of people there, estimated to be more than 1,000 people. A news release described the scene as”chaotic.”

It was the opening night for the business’ haunted house and trail, according to online advertisements. Inclement weather forced a cancellation on Friday. The Sheriff’s Office said there were local people as well as others from around the region and out of state at Reaper’s Realm on Saturday.

After the initial shooting incident, there were multiple fights and secondary shots fired, a news release stated. Video on social media showed crowds of people at the Halloween attraction running while shots rang out in the background. Emergency scanner traffic indicated people took cover inside of a barn and the haunted house.

To help with the large crowd, the Sheriff’s Office received assistance from multiple local law enforcement agencies as well as the Highway Patrol and Concord Police Department.

The Sheriff’s Office said law enforcement officers used pepper spray at the scene on people who “refused to cooperate with law enforcement’s request to cease fighting and disperse.”

Officials used the Walgreens parking lot at the intersection of U.S. 29 and Lentz Road as a location for parents to pick up their children. The Sheriff’s Office used transport units usually reserved for the Rowan County Jail to bring people to the store.

At the reunification point at the U.S. 29 Walgreens. Rowan County 911 Chief Allen Cress is on the scene and said this is standard procedure for reunification. Kids are still being brought to be reunited with their guardians. @salisburypost pic.twitter.com/IqOfK4T5zZ

Parent Gaylor Rattz said his daughter was at the haunted house and that he had not heard from her when he arrived at the Walgreens. Rattz was visibly upset.

Rattz heard from his daughter a few minutes after he arrived.

“Thank you Jesus’” he said.

Rowan County Emergency Medical Services and local fire departments helped with those injured during fighting, blocked off roads and helped with traffic.

A silver Dodge Ram fled the scene, and the vehicle’s occupants are suspected to have fired a number of shots during this incident, the Sheriff’s Office said. Anyone with information about this shooting incident is requested to call 704-216-8711 for 1st Lt. Rodney Mahaley; 704-216-8662 for Detective Josh Simmons; or Salisbury-Rowan Crime Stoppers at 1-866-639-5245.

SALISBURY — Rowan County hit a grim milestone on Saturday, as more than 100 COVID-19 deaths have been reported here.... read more