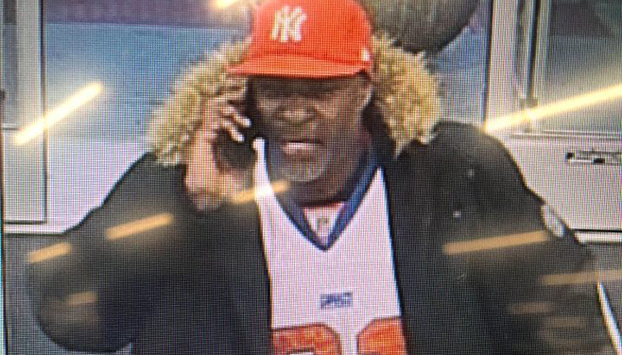 This image, provided by the Rowan County Sheriff's Office, shows a suspect in a theft at Burlington Coat Factory.

SALISBURY — The Rowan County Sheriff’s Office is looking for a man who walked out of a local store with a shopping cart filled with more than $400 worth of clothing and other items.

A deputy responded around 7:15 p.m. Thursday to Burlington Coat Factory, 255 Tingle Drive. The manager told the deputy a man was spotted pushing the cart around the store. He began to fill it with random items, said Capt. John Sifford.

He stopped when the cart was full and continued out of the store. The manager told the Sheriff’s Office she believes the minimum value of the items stolen would’ve been $400.

The man is described as heavyset and wearing a red New York Yankees baseball cap, a black coat with fur around the hood, a white New York Giants jersey and dark blue jeans. He also has a gray goatee. The suspect is believed to have left in a dark colored sport utility vehicle. Sifford said the same man has been spotted on several other occasions stealing from Burlington Coat Factory.