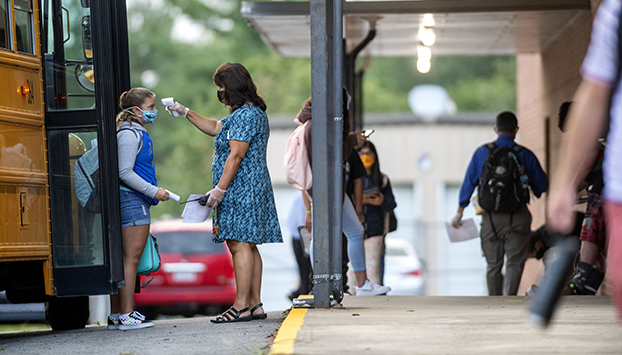 Corriher Lipe Middle school assistant principal Paula Sloop uses a portable medical thermometer to check the students as they arrive by bus at the school on Aug 17, 2020, the first day of school for the 2020-2021 year. JON C. LAKEY/FOR THE SALISBURY POST.

SALISBURY — Rowan-Salisbury Schools administration will begin collecting information to show how it could approach full re-entry in the coming months.

The conversation was part of a called meeting of the school board on Monday. Gov. Roy Cooper last week made the surprise announcement the state will allow local school districts to return elementary students to school five days a week with “minimal” social distancing on Oct. 5, also referred to as plan A. Rowan-Salisbury Schools is currently using a blended model, and has half of students in class two days at a time, with one full-virtual day and the option for all students to go all-virtual as allowed under plan B.

Immediately after the announcement, RSS Superintendent Lynn Moody said she would not recommend the district immediately try to bring elementary students back under plan A. And on Monday, Moody hinted at the same. She advised the board look at other districts which might move into plan A, study how that works and get input from parents and staff before making the change.

“The change management has been overwhelming,” Moody said. “We’ve planned hard for plan B. There’s lots of organizational structures: opening the virtual school, transferring students back and forth, personnel to rightsize the needs of every building. There are lots of H.R. and financial allotment responsibilities.”

During the Monday virtual meeting, the board was generally in agreement it needed more information before it could move forward with bringing students back into the classrooms for more days.

Member Dean Hunter said he wants students back in classrooms, but he also added he does not think it would be wise to abandon the current blended model without more information.

Hunter asked for data on the effectiveness of plan B. He said he’s heard about complaints and problem since the start of school. Hunter also asked how many students the district has not heard from.

“But as we probably all know, we don’t always hear from the parents or the people who are being overlooked,” Hunter said.

“The assessments we are taking right now are really to kind of assess what happened since they’ve been out of school,” Moody said. “But even that will help you I think. We’ll put together all we can.”

Member Josh Wagner opined about the political nature of the COVID-19 pandemic and blamed both sides of the aisle for the confusing nature of regulations.

“There is constant uncertainty and upheaval,” Wagner said. “And I’m sorry that we don’t have folks that are elected, at higher levels than we are certainly, to make better decisions and to make them more effectively without worrying about their seat or their paycheck. I’m really mostly sorry for the children who are still sitting at home who we have to worry about. Are they getting a meal today? Are they being taught today? Are they even opening an iPad to even begin to look at school work for that day?

Wagner said he thinks the district needs to return as soon as it can, but there needs to be consistency instead making decisions incrementally. He expressed interest keeping Wednesday as a teacher work day if there is a full return.

Moody said the main concern at the beginning of the semester was whether there would be COVID-19 clusters requiring a school shutdown. But schools in the state have largely seen few clusters with the guidelines in place that require masks, social distancing and more intense sanitation.