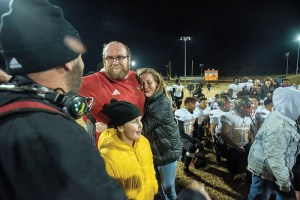 CHAPEL HILL – The North Carolina High School Athletic Association, in conjunction with Wells Fargo, released the final standings in the 41st annual Wells Fargo Cup competitions for the 2019-2020 academic year. The award recognizes the high schools that achieve the best overall interscholastic athletic performance within each of the state’s four competitive classifications. The 2019-2020 season was cut short, due to COVID-19, and therefore, no spring sports points were awarded in this year’s competition.

This year Cardinal Gibbons was the only back-to-back winners of the cup, claiming the 4A State Cup for the second year in a row. Weddington outpaced Marvin Ridge for the 3A Classification. In the 2A Classification, Carrboro reclaimed the cup after Croatan slipped by them a season ago. In the 1A Classification, the Lincoln Charter earned the school’s second State Cup win all-time.

4A State Cup: Cardinal Gibbons takes the top spot in the 4A ranks edging Green Hope by a 40-point margin. The Crusaders did not capture a State Championship as a team this year, however, they finished second in Dual Team Wrestling and Men’s Cross Country while making the school’s first appearance in an NCHSAA Football State Championship Game where they fell to Vance in the 4A Championship game.

3A State Cup: Weddington snatched the 3A State Cup back from last year’s champion and the Warriors’ cross-county rivals, Marvin Ridge. Weddington jumped ahead of Chapel Hill during the winter sports season, holding off the Tigers by a final margin of 405-382.5. Marvin Ridge finished third. Weddington teams highlighted the banner year with state championship victories in Football and Men’s Indoor Track. Men’s Cross Country posted a runner-up finish this year and Women’s Cross Country and Women’s Swimming and Diving both posted third place finishes in their respective State Championship Meets.

2A State Cup: Carrboro edged the defending 2A State Cup Champions, Croatan by a 300-292.5 margin. Carrboro was the top 2A team in Women’s Swimming and Diving while earning a State Championship victory in Women’s Cross Country. The Jaguars also reached the regional finals in Women’s Tennis and the quarterfinal round in volleyball.

1A State Cup: Lincoln Charter won their second Wells Fargo State Cup, sliding past Pine Lake Prep by a 302.5-270 margin in an abbreviated 2019-2020 race. Lincoln Charter teams were the top finishers in 1A for both Men’s and Women’s Swimming and Diving. They also picked up a state championship in Men’s Cross Country, finished third in Women’s Cross Country, and reached the quarterfinals in Men’s Basketball.

ABOUT THE WELLS FARGO CUP

Wells Fargo Cup points are determined by a system based on performance in state championship events. All schools that finish in the top eight positions (plus ties) earn points. In the playoff events involving teams from more than one classification, Wells Fargo Cup points are awarded based on the school’s standing against other schools in its own classification. If fewer than eight schools from a classification compete in a sport, only those schools that are represented are eligible to receive the Cup points.

Points are awarded for all sports as follows: 50 for first, 45 for second, 40 for third, 35 for fourth, 30 for fifth, 25 for sixth, 20 for seventh and 15 for eighth. In the event of a tie, the schools receive an equal number of points based on the number of teams that tie and the number of teams that finish higher in the standings. Five points are awarded for each sanctioned sport in which a school competes.