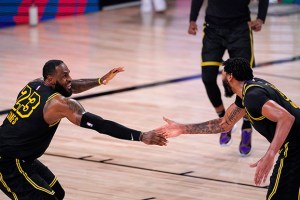 Anthony Davis caught the ball deep on the left side with the Lakers losing and time about to run out.

The shot Davis made to win Game 2 of the Western Conference finals was from nearly the same spot and situation as one he attempted in his team’s last game before the NBA season was suspended.

He missed that one, sending the Lakers to a 104-102 loss to Brooklyn on March 10, and was bummed about it for a few days.

Not LeBron James, though. That moment just reinforced what he already believed about the All-Star forward the Lakers had acquired to play alongside him.

“You’re not going to make them all, but the belief to just take it and live with the results is what it’s all about,” James said.

Davis has been making plenty so far in the deepest postseason run of his career.

He has been the dominant player in this series, where the Lakers have a 2-0 lead with Game 3 scheduled for Tuesday night. Davis followed his 37 points in Game 1 with 31 more on Sunday, including the Lakers’ last 10.

The No. 1 pick in the 2012 draft, Davis had long been one of the NBA’s best players by the time he got to Los Angeles last July. But it’s one thing to be performing quietly in New Orleans, where just winning a postseason round made it a good season.

It’s another thing to be playing with James, where not winning a championship makes it feel like a lost season.

“When I left, I just wanted to be able to compete for a championship, and I know that moments like this comes with it. Especially being in L.A., the biggest market in basketball,” Davis said after the 105-103 victory on Sunday.

“I know the quote-unquote pressure is going to be on us, going to be on me, especially the first year with everything that happened last year, and then also playing alongside Bron,” Davis said. “I know he gets criticized more than any basketball player ever.”

So Davis felt he let down his superstar teammate on that shot against Brooklyn, when James drove into the lane and passed to him near the sideline. Davis had a wry smile on his face after the shot bounced off the rim, but it hid the disappointment he felt inside.

“LeBron will tell you. I mean, the first probably like four days, I was talking to him like, ‘Damn, I should have made that shot. I’ve got to make that shot,’” Davis said. “He’s like, ‘You’re fine, you’re fine.’”

Davis had never made a buzzer-beating shot in the postseason and had only one in his entire career. Now he’s on a list of Lakers that have done it in the playoffs, a group that includes Hall of Famers such as Kobe Bryant, Jerry West and Elgin Baylor, along with noted clutch postseason performers Derek Fisher and Robert Horry.

“Just because his teams haven’t been good enough to reach this moment doesn’t mean that he’s not that caliber of player,” Lakers coach Frank Vogel said.

Without Davis’ shot, the Nuggets would have been celebrating another comeback victory. They trailed by 16 points and had already erased deficits of 15 or more against Utah and the Clippers in the first two rounds, on their way to overcoming 3-1 deficits in both.

So even though they are down, they don’t feel out.

“They had to rely on a great shot by a great player to beat us at the buzzer,” coach Michael Malone said. “But as long as we’re putting ourselves in position to win games, that’s all you can ask for.

“One thing I know about our group, even though we are disappointed, frustrated, angry, we’ll use that motivation to come out and try to take Game 3.”

Those comebacks weren’t against teams as good as the Lakers, who are 10-2 in the playoffs and have won six straight. With James controlling the first half of Game 2 before Davis took over in the second, they had the look of a championship team.

“When they’re both going at the same time,” Vogel said, “we’re near impossible to stop.”

Las Vegas Raiders running back Josh Jacobs (28) helped his team get off to a 2-0 start on Monday. (AP... read more