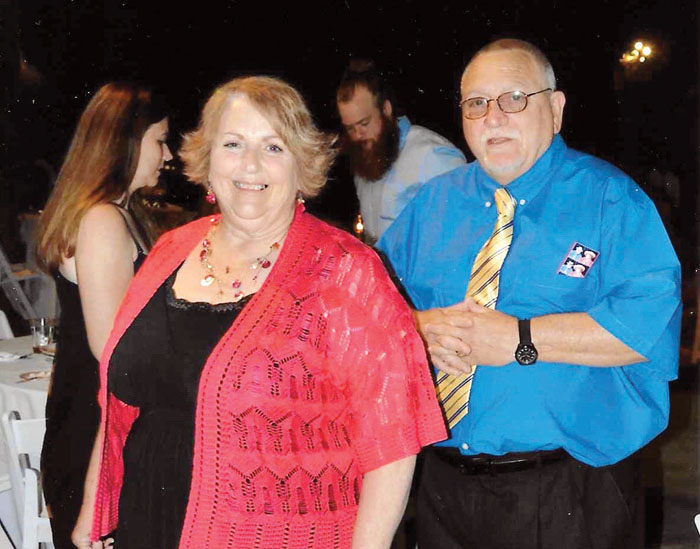 SALISBURY — Shane Peoples lost his parents, Johnny Lee and Cathy Darlene to COVID-19 two weeks ago. And though he’s coping with their loss, Shane says he’s grateful their story has impacted so many.

A particularly remarkable part of the story is that the couple, together for 50 years and married for 48, died within minutes of each other. Their story received widespread attention and news coverage after a social media post by Peoples.

Johnny and Darlene both had pre-existing conditions, which were not their cause of death, Shane declared. His mother had high blood pressure, fibromyalgia and diabetes. His father had pneumonia two years ago that caused some damage to his lungs.

The couple were both admitted to Novant Rowan Health Medical Center on Aug. 11. Two days later, both were transferred to the COVID-19 ICU. They died on Sept. 2.

It was Darlene who first showed COVID-related symptoms. On Aug. 1 she had her first fever. It was 100 degrees, Shane recalled. She went to her doctor’s office and was tested on Aug. 3. Her results came back on Aug. 10 and were negative.

Johnny had a fever and went to the W.G. “Bill” Hefner VA Medical Center to get tested. During that time, a chest X-ray was also done because of some damage from a 2018 case of pneumonia.

On Aug. 7, his father’s tests came back positive. For the next few days, he experienced headaches, found it more difficult to breathe and, among other symptoms, lost his sense of taste. Johnny was taken by ambulance to the hospital on Aug. 11 and admitted to the COVID floor. A few hours later, his mother was taken to the hospital and admitted to the COVID floor.

Johnny was placed on a ventilator Aug. 16 and had a another health scare on Aug. 19. Shane was called to the hospital and able to talk to his mom while wearing protective equipment.

The next day, his mother was doing better and moved to a regular COVID room. She was transferred back to the ICU two days later, placed on a ventilator Aug. 28 and dialysis shortly after.

By Sept. 1 the family had to make the tough decision to let them both pass peacefully because their conditions were not improving.

“We were told they had no chance of surviving. Dad could continue to live on the ventilator, but would never come off of it. Mom’s organs were failing and her heart was in a terrible rhythm,” Shane said.

On Sept. 2, nurses placed the couple in the same room, removed from the ventilators, and they died within four minutes of each other.

Shane has spoken to media outlets around the world, hoping that people come to realize COVID-19 is “no hoax.”

“Their story has reached so many people; it’s hard to imagine they haven’t helped people,” Shane said. “Our parents took the proper precautions but tragically still contracted the virus.”

He often hears people who refuse to wear a mask because it’s uncomfortable. His retort is plain and explicit.

“What’s uncomfortable is burying your loved ones,” Shane said.

Darlene worked at Rowan Family Physicians — where she was employed by LabCorp. It’s there where the family believes she contracted the virus along with six other employees and their family.

Johnny served over 17 years with the U.S. Army. A few years ago, he also retired from the N.C. Department of Corrections.

Darlene was planning to retire on Sept. 1, the day before she died.

In a social media post on Facebook, Shane wrote that he and his family felt cheated. His parents’ lives were stolen by a virus that so many people joke about. But he also dwelled on the love his parents inspired.

Johnny and Darlene were a blessing to “every person that met them,” Shane wrote.

His mother “had the most beautiful soul of anyone” and was generous with her love. His father struck up easy conversation with strangers, was a youth sports coach and loved helping children become better people, Shane said.

Shane said his parents dearly loved their nine grandchildren and would go out of their way to make each one feel special.

Shane’s wish is that every story could be heard from the viewpoint of those suffering, the ones who are grieving and those currently fighting COVID-19.

Shane said his family is thankful for the COVID-19 ICU staff at Novant Rowan Health Medical Center, who were there throughout the entire experience.

“Although the outcome wasn’t what we all had hoped and prayed for, the staff did everything they could to help them and keep us informed. In the end, the staff in their own words, “would move mountains to put them together,” he said.

The staff showed great compassion and kindness towards his parents in their final moments “and for that, we could never repay,” Shane said.