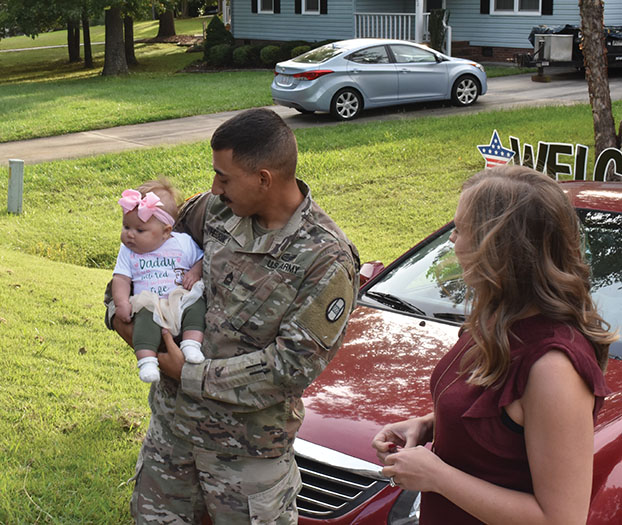 Shane Herrin craddles his 5-month old daughter in his arms as his wife, Tabitha, looks on. Since his daughter, Parker, was born while he was deployed, Saturday was the first time Shane was able to hold her. Ben Stansell/Salisbury Post

SALISBURY — For the first time ever, Shane Herrin held his 5-month old daughter in his arms this weekend.

After serving a yearlong deployment with the U.S. Army in Kuwait, Herrin returned home Saturday to find his front yard and street filled with red, white and blue banners, flashing lights and dozens of his closest friends, family members and coworkers.

Herrin said he appreciated the surprise celebration, but he was happiest to see his daughter, Parker, for the first time.

“It’s good being back,” Herrin said. “I was excited to see her. It was really neat, especially as big as she is.”

By the time Herrin’s car pulled into the driveway, he’d already seen his wife, new daughter and two of his other children, who all drove to Raleigh to pick him up. But he still had plenty of family members to hug when he stepped out of his car, including his sister, Kenza Anderson.

Herrin, Anderson said, has always had a passion to serve. He was so eager to join the Army that he signed up for the National Guard when he was only 16.

“He joined before he even graduated high school,” Anderson said. “He went into basic training and my mom and my dad, because he was underage, had to meet the recruiter at their house and sign for him to be able to join.” 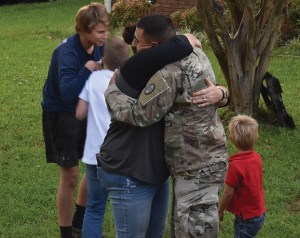 His recent deployment to Kuwait was his third, following deployments to Iraq and Afghanistan.

Herrin will enjoy a few weeks of respite with his family before returning to his job as a North Carolina Highway Patrol Officer, where he’s worked for the previous six years. He’ll also resume his role as a volunteer firefighter for the Rockwell Fire Department. Having several family members who have worked as police officers and firefighters, serving others runs in the family. Herrin is constantly looking for ways to help people, said Jason Page, who has worked alongside him as a Highway Patrol trooper since Herrin joined.

“He’s a hard worker for us. He’s big in the community,” Page said. “He’s always there to help anytime you need him. He volunteers for a lot of stuff and is always ready to go above and beyond.” 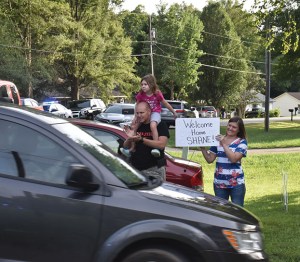 Jason Page and his family greet Shane Herrin as he arrives home for the first time in over a year. Ben Stansell/Salisbury Post

Herrin’s coworkers from both the North Carolina Highway Patrol and Rockwell Fire Department lined the street when he returned, flipping on their vehicles’ lights before stepping out and giving him a round of applause and greeting.

“Seeing this really lets you know how good your friends are,” Herrin said. “It’s a good turnout. A lot more than I expected. I didn’t expect anything from them really. I expected my family to be here, but not all of this.”