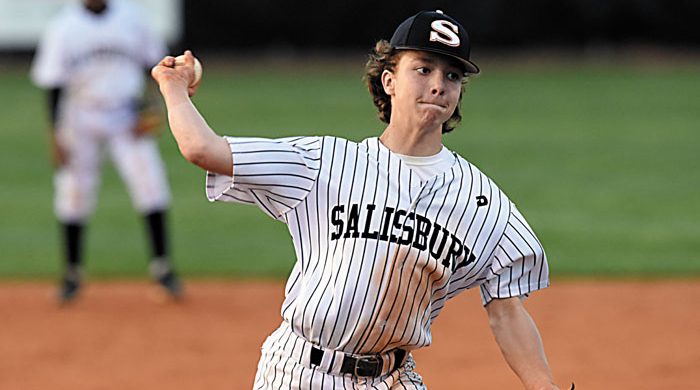 Salisbury's pitcher Vance Honeycutt 6 plans to play for UNC at the next level. File photo by Wayne Hinshaw, for the Salisbury Post

Herndon coached Merrifield, MLB all-star with the Kansas City Royals, in his days at Davie County High. Now he coaches Honeycutt, a Salisbury High senior who is committed to North Carolina’s baseball program.

“I told Vance when he was a freshman that he had every bit as much talent as Whit did, that the only difference was that Whit worked a lot harder,” Herndon said. “But then Vance went to work in the weight room and he’s done everything that it takes to excel. Now look at him. Now he looks like a Division I guy is supposed to look. That’s a good-looking kid, almost 6-foot-3 and 185 or 190, and he runs like a gazelle.”

Herndon’s son, Carson, was a Division I pitcher at Liberty not long ago. He throws BP to Honeycutt several times a week. BP is BP, but this isn’t standard high school BP.

“In five years at Salisbury, I’ve seen three home runs hit to left field in our park,” Mike Herndon said. “Vance hit a dozen out the other day off Carson. The ball is jumping off his bat different now. It sounds different now. I don’t know what position Vance is going to play at Carolina, but I have no doubt he’s going to hit a lot of home runs for them.”

Like Merrifield, who had parents who were accomplished athletes, Honeycutt has a promising gene pool. His parents were star athletes at North Rowan and both competed for the Tar Heels — Bobby in baseball and Leah Ann in track and field. Honeycutt’s sisters, Kayla (tennis) and Julia (soccer), were exceptional student-athletes in every way and were Rowan County players of the year.

Honeycutt started growing relatively late, but then he shot up 5 or 6 inches in a single year. Then his athleticism started catching up with his new body. It’s been a process, but now he’s arrived.

“All the success that my family has had athletically really helped to push me to be my best,” Honeycutt said.

Honeycutt has been the starting shortstop and a pitcher for the Hornets since his freshman year. As a freshman and sophomore, he was a slim .290 hitter with limited power, but he showed enough potential playing for the South Charlotte Panthers between his sophomore and junior seasons that UNC offered him a scholarship. They liked the strong arm, the soft hands, the quick feet and the exceptional speed. He was running a 6.8 60-yard dash then, and there’s no doubt he’s faster now.

“I was only about 155 pounds then, but I was getting a chance to play all over the southeast and getting the opportunity to compete against some of the best players around,” Honeycutt said. “UNC has a great school and a great program and was always at the top of my list, so it was really exciting when they believed in me and offered me. I got the chance to meet a lot of the recruits in my class at a UNC football game, guys from Texas and Florida and New Jersey, guys from out of state mostly, but all good guys.”

Honeycutt announced a verbal commitment to the Tar Heels in the summer of 2019. It surprised some people because he hadn’t been a high school star up to that point.

“I can honestly tell you I saw it coming for years,” Herndon said. “Believe me, this guy is a dude. He hasn’t gotten a lot of accolades yet, but I believe he’s the best baseball player in Rowan County.”

Honeycutt’s athletic ability started to get noticed by more people in the fall of 2019 when he was the junior quarterback for the Hornets’ playoff run that ended with 13 wins and state runner-up honors in 2AA. The Hornets would rather pound it than air it out, but Honeycutt threw for 1,507 yards and 12 touchdowns. He ran for 626 yards and seven touchdowns. He had 100-yard rushing games against North Davidson and against Mount Pleasant in the first round of the state playoffs.

Last spring probably would have been the baseball campaign that catapulted him to being a household name in Rowan County, but COVID-19 ended the Hornets’ season after five games. Honeycutt was 6-for-15 at that point, with three doubles and an inside-the-park home run — his first high school homer.

“I hit one in the right-center gap against North Rowan and just kept running,” Honeycutt said. “It was close at the plate.”

Honeycutt, a Braves fan who plans to major in business at UNC, is competing with the South Charlotte Panthers in Durham this weekend.

He’s rated as one of the top five middle infielders in the state in the Class of 2021, but he may end up being a second baseman, third baseman or left fielder for the Tar Heels. They recruit primarily guys who have played shortstop or center field in high school because those are the guys who can run. Herndon says he could play anywhere the Tar Heels need him to play, except catcher.

Some recruiters have compared Honeycutt to Josh Horton, the All-America shortstop for the Tar Heels who starred on teams that reached the College World Series. That’s high praise, but Honeycutt is one of the fastest-rising prospects in the state in his class.

High school in 2020-21 is different. “Odd” is Honeycutt’s one-word description of it. He attends classes physically on Mondays and Tuesdays. Not surprisingly, those are the days he likes best.

He’s obviously excited about the football season that is planned for February. The Hornets are expected to be a handful for anyone who runs into them.

Honeycutt also is excited about the baseball season that is scheduled to begin in April. Salisbury will have small numbers, not many more bodies than the minimum, but the Hornets have been bolstered by North Rowan transfers and both Herndon and Honeycutt expect the team to be competitive. Honeycutt is expected to be the leadoff man, the best way to make opponents pitch to him.

“Things are going to continue to snowball for Vance,” Herndon said. “This kid has got it. I believe he’s going to be a rock star.”