Going virtual: How the iconic October Tour was translated to a digital format 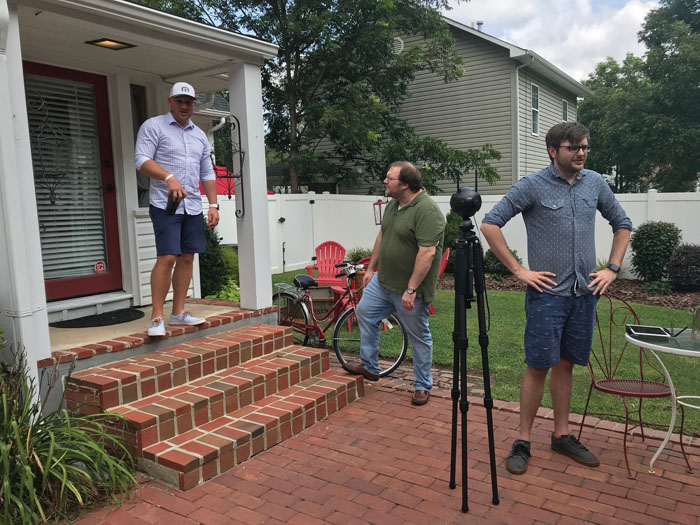 Taylor Hutchins and Daniel Waters of DKM Media set up their 360-camera at the Snider-Floyd House as the home's owner, Chace Jensen, looks on from the porch. Photo submitted.

SALISBURY — For the past several months, DKM Media has been shooting pictures, flying drones and mapping out rooms digitally in order to transition the Historic Salisbury Foundation’s OctoberTour into a virtual event for the first time in its 45-year history.

The decision to go virtual came in the spring, when the COVID-19 pandemic raised doubts about whether an in-person event where groups of people crowd into houses would be feasible or safe. At that time, the Historic Salisbury Foundation was working with Salisbury-based company DKM Media to give the organization’s website a facelift.

The partnership came at the right moment.

“We’d already decided that we were going to use DKM to redesign our website,” said Sada Stewart, the executive director of the Historic Salisbury Foundation. “We’d been working with them and as we were talking about how we didn’t know what to do and how we were considering going virtual, they said ‘We can help you with that.’ ”

In June, DKM began the process of virtualizing tours for seven historic homes and buildings so that people can appreciate the nuances and history of the houses from their own.

“We have a special camera that takes six pictures at one time and provides a 360-view,” DKM Media co-owner Taylor Hutchins said. “With that, you’re able to fully guide yourself around an entire space. We have the ability to also take that and integrate music, audio and video as well.”

“They have it down to a science,” Stewart said. “They put the camera into a central location and operate it with an iPad and they direct it to take all of the photos they need to take. I was there the first time when they were filming the Hall House and they filmed the whole house in about two hours.”

Although participants won’t be able to see the houses in person, they will see them in a way that they’ve never been shown before. Starting on Oct. 9 at 6 p.m., people can go to the website any time and click through a tour of the homes at their own leisure. Along with video and audio elements, the tours will feature personalized messages from some homeowners, including Jacquelyn Jensen.

Having grown up in Salisbury, Jensen always had an appreciation for the town’s history and can recall attending OctoberTours from a young age. Now, the historic Snider-Floyd House that she bought with her husband Chace in 2013 will be featured on the tour for the second time.

“We’ve made some really big changes to the house,” Jensen said. “The bathrooms and the hallway were completely renovated since it was on tour in 2018.”

The house was built around 1925 for Robbie Snider, a fireman for the Southern Railway. To tell some of its history, Jensen was recorded by DKM reciting a script that she wrote when the house was on tour two years ago. Being on a virtual version tour was something she wanted to do from the time the change was announced, Jensen said.

“When we heard they were interested in doing a virtual tour, we said that we wanted to do it,” Jensen said. “We’re really excited about it.”

Like other homeowners, Jensen was also filmed for an “extra,” a personalized video in which they explain something unique about their house. Jensen discussed how to use container gardening to make a porch more versatile.

In addition to the online version of OctoberTour, the Historic Salisbury Foundation is offering a scavenger hunt and socially distant patrons’ porch event, where homeowners can meet with historic enthusiasts in a safe setting.

Although the Historic Salisbury Foundation isn’t putting up a paywall for people to view the tour, it is accepting donations, which will be especially critical this year since the October Tour typically makes up a major portion of the organization’s budget.

Ann Farabee column: The next room