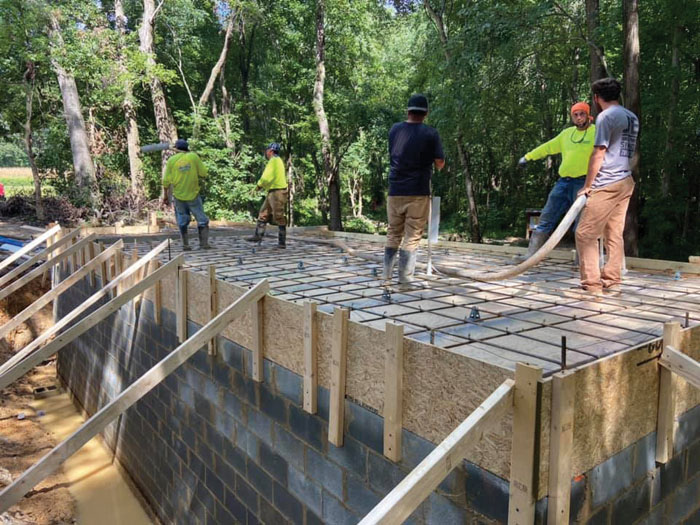 A construction crew works to seal the top of the Hobbit House, which will need to be structurally sound to support the dirt that will go on top. Photo submitted.

CHINA GROVE — Trent Cherry has never seen a Lord of the Rings movie. Nor has he ever read J.R.R. Tolkien’s books.

But that hasn’t stopped him from building a Hobbit House of his own at the Cherry Treesort in China Grove.

“I’m not a Lord of the Rings fan, I’ve never watched it, which is kind of funny because I’m building one of these things,” Cherry said. “Most people said I should have watched it before I built this house, but I always kind of do things backwards.”

Cherry’s latest architectural experiment, what he calls a “Hobbit House,” is unique in many ways. For one, it’s the first structure at the Cherry Treesort that’s touching the ground. Since he started his ecotourism resort six years ago, Cherry has built five tree houses on his 27-acre property. This time, instead of elevating guests above ground, his newest creation seeks to bring them closer to it.

“I just decided this year that I wanted something different and so I’ve been talking about a couple different things and I came up with the idea that we were going to build below ground instead of aboveground,” Cherry said.

To create the Hobbit House, Cherry first staked out the most appropriate hill on his property. From there, with the help of his friends’ skid steers, he flattened the mound and raised a structure in its place.

Without a “playbook” to help him, Cherry has faced new challenges while building the Hobbit House, including the almost ever-present threat of having a work day washed out by rain.

“It’s been really fun, but it’s been a nightmare at the same time,” Cherry said. “Rain doesn’t affect us that much on a treehouse build, but when you’re building below ground, it’s a killer.”

Still, Cherry is impressed with the progress his team of about six workers has made since starting in early August. They’ve been building almost non-stop and the house received its biggest test on Thursday when several inches of rain fell. The prolonged showers gave him a good idea of the structure’s integrity and whether the drainage system he installed is working properly or not.

Once the structure is complete, the same dirt that was moved to begin with will be added back on top of the building, leaving only the front wall and door exposed to the outer world — thus creating the Hobbit House effect. Consisting of just four rooms, including an entryway, living room, bedroom and bathroom, the Hobbit House will only be about 400 square feet.

If work continues as planned, Cherry anticipates that he’ll be booking stays in the Hobbit House starting in mid-October. A few people, Cherry said, have already contacted him in hopes of picking a date for a visit.

Without really understanding it, Cherry is tapping into a worldwide fanbase of Lord of the Rings enthusiasts. His new Hobbit House will give them an opportunity few other places can.

“They have an interesting following. I’ve got people who are asking me if they’re allowed to have dress-up parties,” Cherry said. “I’m like ‘If you want to come looking like a wizard, come on. It’s not for me to decide.’ ”

Cherry isn’t planning on mimicking Lord of the Rings decor inside the Hobbit House. He doesn’t even know what that would look like. But he does plan on the interior of the house being somewhat unadorned.

“We’re trying to make it fit what it is,” Cherry said. “You’re not going to walk in and see white walls or black tables. It’s going to be very rustic and hobbit-ish, if that’s even the right word to use.”

Cherry expects the space to be used by more than just Lord of the Rings fans. Like all of his structures, he said that he wants it to be a place where people can get away.

James Meacham, the Rowan Convention and Visitor’s Bureau CEO, is glad to see one of the county’s most popular tourist attractions continue to grow, especially in a year when tourism as a whole is down. Cherry Treesort, Meacham said, is one of the area’s tourism draws that is poised for progress, despite the pandemic.

“They’re growing in this environment,” Meacham said. “It’s giving families a way to reconnect and do it in a safe and healthy way. They’ve found a way to have an innovative way to have a unique, authentic and original product that is also healthy.”

Once he finishes the project, Cherry said he might carve out time to watch one of the fantasy franchise’s movies.