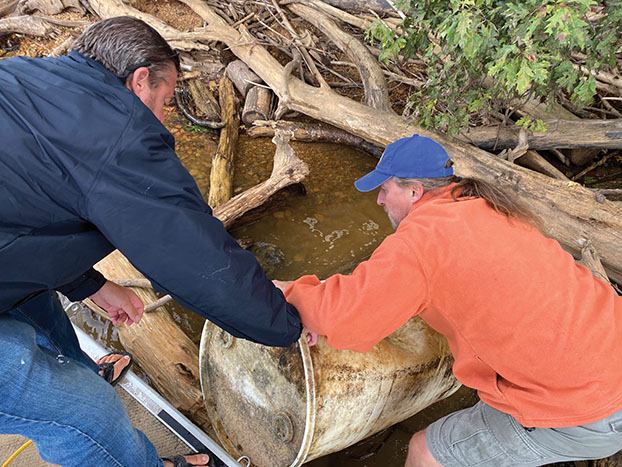 HIGH ROCK LAKE — Rocky Phillips held the white barrel steady as Barry Childers fired up his power saw and cut a chunk off the corner, allowing stale water to drain out to lighten the load.

In order to get to the barrel, which was lodged in a pile of sticks in shallow water on High Rock Lake, Phillips had to strip off his boots and socks and wade through a few feet of chilly water. After Childers sawed off the corner, he helped heave the barrel onto his pontoon boat, adding it to the pile of trash that was quickly piling up.

For Childers, removing the debris from the lake wasn’t just a random good deed. It’s something he’s been doing since he was a child.

“My dad planted the seed with me,” Childers said.

From a young age, Childers, who now lives on the lake and owns Childers Construction, remembers participating in the High Rock Lake Clean Sweep — a day where lake residents and stakeholders combine forces to pick up litter and trash that has polluted the lake’s waters. The event became a yearly tradition in the mid-1980s, but petered out less than a decade later. It remained dormant since then — until Childers had dinner with Shane Graham.

Like Childers, Graham grew up on the lake and had fond memories of participating in Clean Sweep. He’s also a business owner who still resides near the lake.

“Shane and I were enjoying dinner one day and we were talking about things we’d done since we were children and how the lake has gotten really dirty,” Childers said. “We were talking about how we used to clean up the lake and how rewarding and fun it was and how we looked forward to going out with our fathers every year. He said ‘You know what? With your contacts we have, we could get that going again.’”

That’s just what they did.

In 2018, Childers and Graham restarted High Rock Lake Clean Sweep. In its first year back, only about 50 people participated. In year two, that number jumped to around 150. This year, despite COVID-19 hampering the event’s turnout, dozens of people spread out across the lake Saturday to pick up and properly dispose of trash littering the waters and woods.

“We felt like, if we just got two bags of trash out of this lake, that was two bags more than would’ve been pulled out,” Childers said. “It’s still a win.”

Among this year’s participants were boy scouts, fishermen and an assortment of High Rock Lake residents. David Bolson, who lives near the lake, remembers helping out with the Clean Sweep when it was first started almost four decades ago. When Childers and Graham reinvigorated the event, Bolson and his family were eager to help out again.

“We’ve been to every one that’s ever happened,” Bolson said. “We like coming here a lot so we like to keep it clean. A lot of people don’t take with them out what they put in, so we need to help.”

While Childers led the cleanup efforts on the Rowan County side of High Rock Lake, Graham focused his efforts on the Davidson County portion. Each year, after the garbage is collected and weighed, the two counties compare their catches. Last year, Rowan bested Davidson, collecting 13,000 pounds of trash to Davidson’s 7,800 pounds.

No matter how much garbage is collected, Childers is proud to see some headway being made into High Rock Lake’s litter problem.

“It’s because we’re the first lake on the chain and all the trash comes down,” Childers said. “One of the biggest things is, a lot of this trash flows from stormwater drains in your creeks from people’s houses.”

There are always certain spots of the lake where trash collects, which are the areas that the Clean Sweep crews typically focus on. Among the most common items that are discovered are plastic bottles, flip flops and styrofoam, but Childers said they have even found larger items like tires, toilets and even a submerged boat.

Next year, Childers said that he hopes there will be an even larger turnout.

“We want it to be bigger, better and badder,” Childers said.

From fantasy to fact, Cherry builds a Hobbit House…