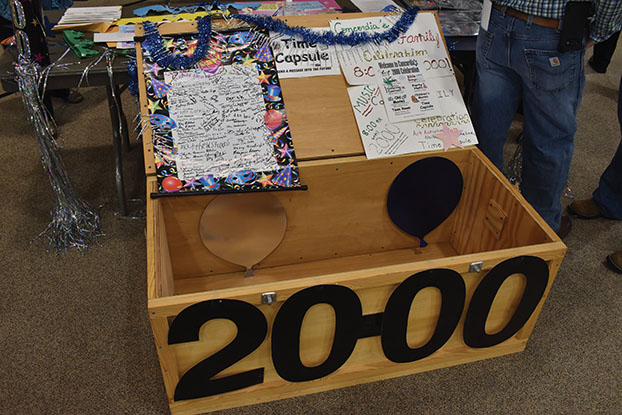 When Concordia Church members opened the wooden time capsule, it was filled with trinkets from the past, including books, letters, hats and drawings. Ben Stansell/Salisbury Post

CHINA GROVE — The keys to a time capsule were found in January — exactly when the congregation of Concordia Lutheran Church planned 20 years ago for the wooden box to be opened.

The only problem was the box itself was nowhere to be found.

“The keys were in an envelope that said 2020 time capsule, but the box had been moved a couple times and we’d lost track of it,” said Judy Haire, who is a member of Concordia Lutheran Church’s history team.

After rummaging through old storage rooms and spaces for several weeks, the wooden box was finally unearthed from storage under the stage.

“Imagine how excited we were when we finally found it and were able to see its contents,” Haire said.

When the church staff opened it, they discovered letters, books, hats, knickknacks and decorations from a 1999 New Year’s Eve party during which the congregation had filled the capsule.

Along with Pokémon toys and a Guiness Book of World Records for the year 2000, the capsule contained letters from churchgoers predicting the future. One especially prescient letter, written by Carolyn McLaughlin, was read aloud at the church’s Sunday morning service by Judy Haire.

“She wrote, ‘The world will be so different. Computers will be as normal as telephones in homes. Groceries and all shopping will be done electronically from the home,’” Haire read. 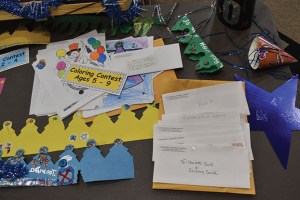 The pictures from the coloring contest that was held during the New Year’s Eve party in 1999 were stashed in the box, along with letters written from churchgoers to their future family and friends. Ben Stansell/Salisbury Post

After Sunday’s service, current church members gathered around the displayed capsule to see what their counterparts from the past had stashed away.

Kittie McLaughlin, who was in attendance at the 1999 New Year’s Eve Party, pored over the box’s contents, examining pictures that were colored by children she chaperoned during the night’s festivities. Although Kittie didn’t write a letter boldly predicting future events, she composed letters to loved ones.

“We had a lot of sweet letters that were included in there,” McLaughlin said. “I wasn’t as forward looking as Carolyn. She nailed it. I did write letters to my grandchildren.”

Concordia plans on collecting more letters and personal belongings to refill the time capsule and seal it for 12 years. It will be opened in 2032 on the church’s 150th anniversary. The box will once again feature trinkets of today, but it will also include a written history of the church’s previous 20 years. That volume will feature a section about how the church has dealt with the COVID-19 pandemic. 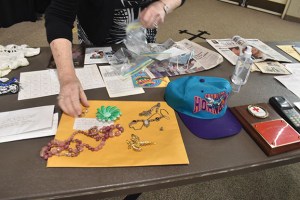 Judy Haire arranges the jewelry that was put into the box in 1999. The contents of the time capsule are on display at Concordia Church. Ben Stansell/Salisbury Post

“We have the history of COVID. We have a sign that says the three Ws, what you’re supposed to do and we have a newspaper article. So we have included a lot of information about COVID-19 and how it impacted our church,” Haire said. “We included how we had to close, reopen and the steps we took.”

Health concerns forced the church to shutter for several months in the spring, before it opened again in June. Haire said that it was the only time during her life that the church has closed for multiple Sundays, besides a few snow day cancelations from time to time. When Concordia resumed in-person services, worship was moved out of the sanctuary and into a large multi-media room to promote social distancing.

The time capsule will be displayed through the end of the week. Haire said church members will continue to collect letters and other items from the congregation for two weeks before sealing the capsule once again.