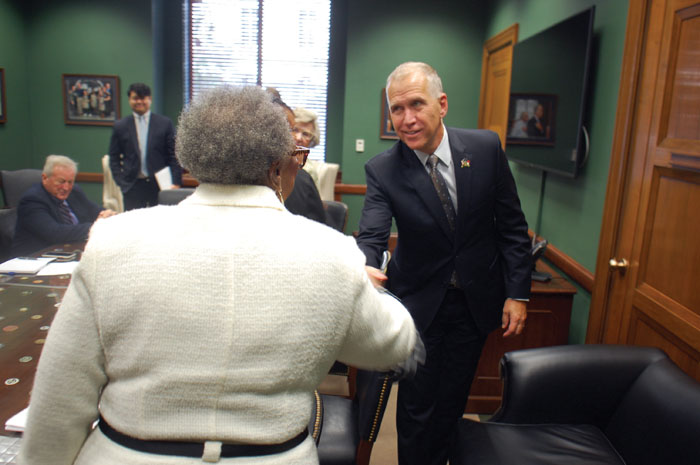 RALEIGH (AP) — When President Donald Trump fired up a crowd at a North Carolina airport last week, he gave a shout-out to the home-state senator fighting in his own tough reelection battle that could decide control of the chamber.

Republican Sen. Thom Tillis, Trump said, has “been by my side!”

But at that moment, Tillis wasn’t. Sitting among the thousands in the outdoor Winston-Salem crowd, the senator was in the small minority wearing a face mask to protect against the coronavirus that the president and many conservatives have downplayed. “If scientists are telling me to wear a mask, I’m going to wear a mask,” Tillis said recently at a small Raleigh campaign event.

How Tillis remains close to Trump politically could determine whether he wins a second term against Cal Cunningham, a well-funded Democrat who until recently was leading in polls. The swing-state senator has spent the last four years trying to calibrate his distance to a president who is beloved by die-hard conservatives but brings discomfort to many moderates, who will likely determine the election.

Trump is holding a rally in Fayetteville, his fourth event in the battleground state in as many weeks, on Saturday. Tillis plans to be there.

“Tillis has been very strategic running the campaign he needs to run to by picking up those crucial voters in suburban areas,” Democratic consultant Brad Crone said. “When it’s a disadvantage to align with Trump, he’s distanced himself.”

Tillis’ approach has brought pitfalls and awkwardness at times.

He angered the Republican base last year by publicly opposing Trump’s emergency declaration to fund a U.S.-Mexico border wall. He changed his mind later, pleasing seemingly no one but the president, who endorsed him for reelection months later. Tillis was one of Trump’s strongest defenders during impeachment. And while Tillis has preached mask use — something Trump and conservatives have been indifferent or hostile to — he went maskless in a dense crowd last month at the president’s Republican nomination speech outside the White House. Tillis apologized the next day.

Cunningham, an Iraq War veteran who outraised Tillis’ campaign during the previous two quarters, said Tillis’ actions show he’s only interested in doing what suits him to get along with Washington power brokers.

“He won’t stand up,” Cunningham, 47, said in an interview with The Associated Press. “He’s here in-state talking one game, and he goes to Washington and does something different.”

Tillis’ campaign insists his backing of Trump doesn’t fluctuate. Rather, he tailors his message. Voters most likely to back the president get campaign materials highlighting Tillis’ support for Trump’s policies. And with unaffiliated voters, who represent almost a third of the electorate, Tillis emphasizes that liberal policies could be implemented if Cunningham and other Democrats win.

“I think that this race has to be about the two candidates that are before the people of North Carolina,” Tillis told reporters after his first debate with Cunningham Monday. “What I have worked on, I’ve supported the president. I’ve also taken exception in certain cases, particularly around the budget. But this race is really about who’s best to be the U.S. senator from North Carolina.”

Known as business-oriented while in the state legislature, Tillis, 60, cut taxes, led efforts in Raleigh to put a constitutional amendment banning same-sex marriage on the ballot and helped pass a law prohibiting the state from expanding Medicaid through President Barack Obama’s health care law. North Carolina remains among a dozen states without expansion — an issue that Cunningham used to criticize Tillis during the debate.

When asked about Trump’s pandemic response, Cunningham said there had been “an unprecedented failure of leadership” and blamed Tillis for failing to act quickly. But Cunningham didn’t use the debate to further attempt to link Tillis to Trump — a potential sign that it might not be a winning strategy for him. Tillis, meanwhile, said he trusted mail-in absentee voting, which Trump has seeded distrust about.

Since Tillis beat Democratic incumbent Kay Hagan in 2014, the state’s population has become more Latino, more college-educated and younger. Newcomers have flooded increasingly Democratic urban centers and helped the party gain legislative seats in 2018. But while Democrats remain the largest bloc of North Carolina voters, they are becoming a smaller percentage of the electorate as independent and Republican registrations grow.

The Senate winner will have to secure his party’s base and attract unaffiliated voters who crowd counties adjoining affluent Raleigh and Charlotte.

Most of North Carolina’s urban centers went to Democrat Hillary Clinton in 2016, while Trump swept up votes in rural counties en route to winning the state by more than 3 percentage points. Recent polls show a close race between Trump and Biden in North Carolina.

Unaffiliated Charlotte voter Don Jonas, 53, said this week he still considers himself a persuadable voter in the Senate race.

The executive director of a nonprofit providing health care to low-income residents, Jonas said he had hoped that Tillis would be a “centrist, moderating influence” upon the Republican Party’s “drifting more toward some of the nativism and populism that Trump has brought.” That hasn’t happened often enough, he said.

But Jonas also said Cunningham hasn’t “sealed the deal” with him and other like-minded Charlotte-area voters because he’s still largely an unknown commodity.

AP’s Advance Voting guide brings you the facts about voting early, by mail or absentee from each state: https://interactives.ap.org/advance-voting-2020/