SPENCER — The sound that for decades dictated daily life around Cannon Mills and its subsequent iterations whistled back to life Friday at the N.C. Transportation Museum.

About 17 years since it last sounded, the Kannapolis History Associates brought an 18-inch-tall steam whistle nicknamed “Major” to the Spencer museum, strapped it to the side of the Norfolk & Western Class J 611 engine and connected it to a powerful compressor that pushed through a rush of air.

The first try was a dud; the whistle was connected to a compressor that wasn’t powerful enough. In a subsequent try, the nostalgia came rushing back for the small crowd gathered, and the low-pitched wail echoed across the museum and into the town of Spencer. 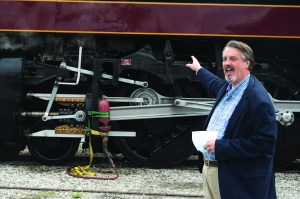 Josh Bergeron / Salisbury Post – Kevin Cherry, deputy secretary of the N.C. Department of Natural and Cultural Resources, talks Friday about the whistle attached to the side of the Norfolk & Western Class J 611 engine before it was sounded.

Kevin Cherry, deputy secretary for the N.C. Department of Natural and Cultural Resources, called the event a display of North Carolina’s industrialization — the railroad and textiles.

“The textile industry and the railroads were huge at the turn of the (20th) century,” said Transportation Museum Director Kelly Alexander. “Think about Kannapolis being just down the road and all the trains that would have taken boxcars full of stuff there.” 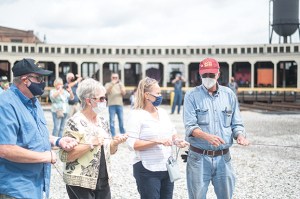 Josh Bergeron / Salisbury Post – From left, Rob Smith, Pat Adams, Cherri Hudson and Scott Lyndsay pull a line to sound a whistle known as ‘Major’ that was placed at Cannon Mills in the early 1900s and was recovered after the demolition of the Pillowtex plant in 2003.

The whistle is one of two in possession of the history associates, with the other being similarly sized and nicknamed “Big Mary.” For decades, it was used at Cannon’s plant No. 2 in Concord. The history associates and museum staff had hoped to test “Big Mary,” too, but said it had been damaged.

“Major” was placed at the first Kannapolis mill, completed in 1907. It was always blown at 5:30 a.m. for wake up, 6:40 a.m. to signal it was time to head to work and 7 a.m. to start work. It also was sounded for lunch breaks and shift changes, with red lights also used in particularly noisy locations in the plant.

A history compiled by Kannapolis History Associates states “Major” was used as the town’s fire alarm for a time, with the boiler operator giving a dozen short blasts on the whistle. It was used to signal the beginning of a strike, a union vote, blackouts during World War II and a range of other occasions. Those who grew up in Kannapolis say they could hear it some days from miles away, particularly when the windows were open and if the wind was blowing just right. 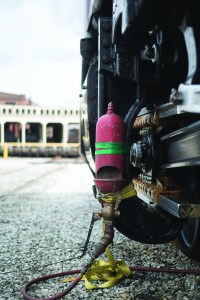 Josh Bergeron / Salisbury Post – A whistle known as ‘Major’ was strapped to the side of the Norfolk & Western Class J 611 on Friday and sounded using an air compressor. The whistle was formerly used at Cannon Mills and its subsequent iterations in Kannapolis.

Ed Robinette, museum curator for Kannapolis History Associates, said “Major” was recovered by Randy Hudson, the last employee of Pillowtex, and donated to the association last year. Hudson worked in the pipe shop at the plant and was hired in 2003 by a demolition company following Pillowtex’s bankruptcy. Cherri Hudson, Randy’s widow, and friend Lynn Fesperman suspect that Randy picked up the whistle after the demolition.

Cherri said her late husband was a collector of all types of items and joked that he often “snuck things in.” She remembers seeing the whistle in their home and asking about it.

“The mill was his life, and I think it devastated him when it closed. When he left finally, he was never the same,” Cherri said.

Fesperman says he wishes that the whistle had been donated earlier so that Randy could have participated on Friday, too.