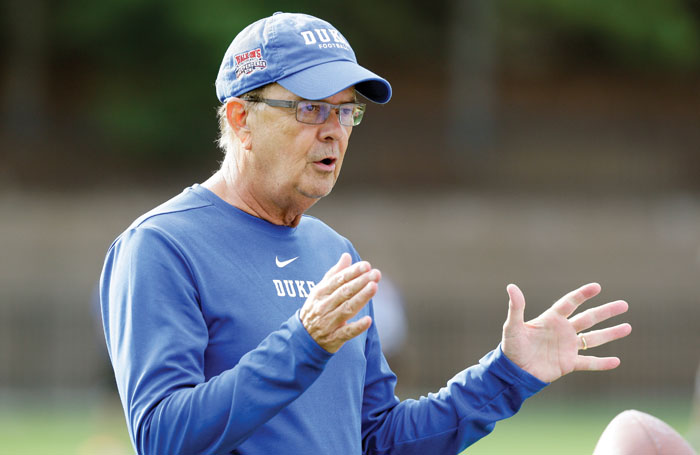 New Boston College coach Jeff Hafley had to wait an extra week in the schedule to make his debut with the Eagles while most of the Atlantic Coast Conference got to play opening games.

“Looking back,” Hafley said, “I was kind of jealous that those guys all got to play and that we didn’t.”

Hafley’s debut comes Saturday when Boston College travels to Duke, the first chance for the former Ohio State co-defensive coordinator to see how much the Eagles have picked up through limited spring practices and altered offseason routines.

The school hired Hafley for a spark after going 44-44 in seven seasons under Steve Addazio. He had to wait to officially start work until after the Buckeyes lost to Clemson in the College Football Playoff, then only had five spring practices before the pandemic shut down college and professional sports.

Then the Eagles had to wait an extra week to start when the ACC unveiled a revamped scheduling model built around 10 league games and one nonconference game played in the home state of the member school. Eleven of 15 teams played last weekend, leaving only BC, North Carolina State, Virginia and Virginia Tech on the outside.

“Our kids are really exited to play in a real game,” Hafley said. “They’re excited to play against somebody besides ourselves. I think that they’ll be locked in.”

The Blue Devils are coming off a loss at No. 7 Notre Dame, which marked the debut of Clemson graduate transfer Chase Brice as the starting quarterback as well as coach David Cutcliffe taking over play-calling duties as well.

“To prove that we’re a good football team, you don’t prove it by playing well, and playing well against a great opponent,” Cutcliffe said. “You prove it by winning. And what this team has to do is put the bumps and the bruises behind you. The Week 1 to Week 2 improvement is there for you, depending upon how much energy you have and the effort you put into the preparation.”

Here are things to know about Saturday’s BC-Duke game:

Brice threw for 259 yards and ran for Duke’s lone touchdown, but the Blue Devils finished with just 79 yards rushing on 30 carrels (2.6 per carry). Duke also had two lost fumbles.

“On the road at Notre Dame, that’s a tough, tough first game,” Brice said. “But that’s just the draw we got. … We’re going to build so much off of what we saw on film.”

Hafley listed both incumbent Dennis Grosel and Notre Dame transfer Phil Jurkovec as potential starters. Asked for clarification, he said, “You’ll get a clarification probably right as the ball is kicked off and whoever walks out of the huddle.”

Grosel started seven games last season as a sub for the injured Anthony Brown, completing 48% of his passes for 983 yards, nine touchdowns and three interceptions. Jurkovec was a backup for the Irish in 2019 and was granted an immediate eligibility waiver from the NCAA.

“Right now it’s ‘OR,’ so that means both could be starters,” said Hafley, who refused to commit to starters at 13 positions on the depth chart. “I want to build this thing on competition. And the reason I did that is because I believe competition brings out people’s best.”

Hafley would love to repeat some of the quick and major strides from his time with the Buckeyes.

He took over a defense that was 11th in the Big Ten — and 86th in the nation — in passing yards allowed in 2018 and had them No. 1 nationally last season. Boston College was No. 122 in the nation in pass defense last year.

Duke plans to have the capital-D shaped logo on the helmet in black as well as a fist logo on the back to raise awareness for social justice issues.