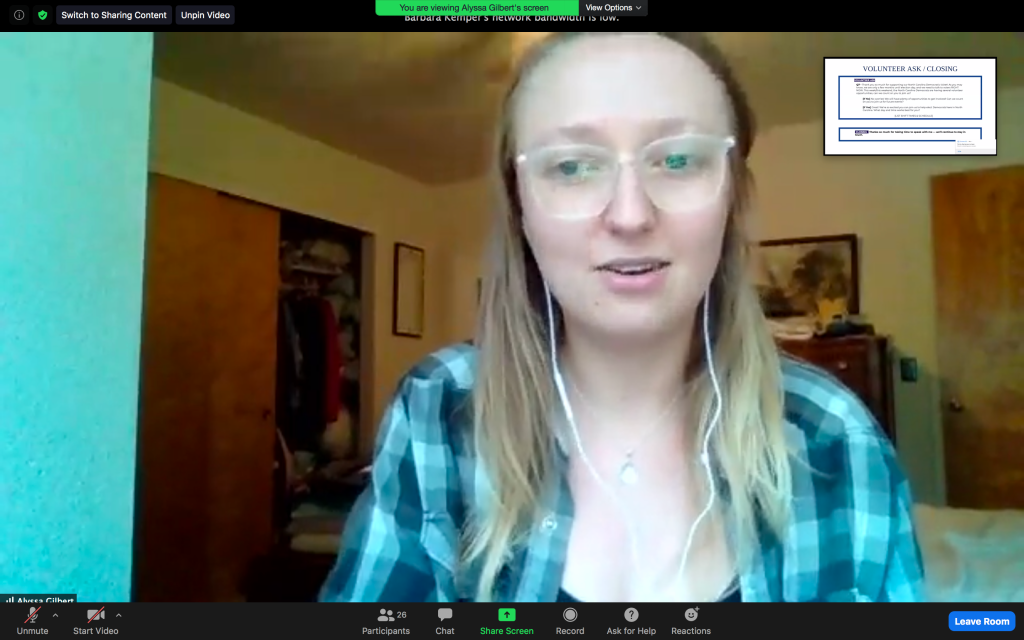 Alyssa Gilbert, who is a coordinated campaign organizer for Democratic candidates in Rowan County, led the discussion during the Rowan County Democratic Party virtual office reopening on Wednesday.

SALISBURY — Local Democrats on Wednesday night emphasized the need to “turn the state blue” and shared their reasons for being in the party during a virtual county office reopening event.

Alyssa Gilbert, who coordinated the reopening, is the campaign organizer for local Democratic candidates, who go “from Biden all the way down to Alisha Byrd-Clark,” she said. Byrd-Clark has served in the Salisbury area seat on the Rowan-Salisbury Board of Education since 2016.

Gilbert, the daughter of a single mother, grew up in a logging town in Oregon. There, she watched her mother work three part-time jobs to make ends meet. Gilbert credited the food stamps program with saving her family and the Affordable Care Act, or Obamacare, for allowing her mother to have health insurance for the first time in years.

She added that her mother was able to reach a point where food stamps were no longer needed, which Gilbert said is the goal.

She added that America can expect to see similar success stories with former Vice President Joe Biden in the White House and other Democratic candidates elected to office.

“These programs are things we really can stand up for in the election,” she said.

Jim Beard, a retired professor from Catawba College, said he was driven to the Democratic party due to his Christian beliefs, adding that he dislikes the idea pushed by Republicans that one must be a Republican if they’re a Christian.

“I do think the Christian faith is most in line with Democrats’ principles,” Beard said.

He emphasized the importance of the election and added, “Trump likes autocrats, and given the chance, he’ll become one.”

Salisbury resident Kimberly Kaufmann, who also works at UNC-Greensboro, said it’s important, especially in this election, to educate communities on the concepts of diversity, equity and inclusion.

“This election has become about saving our democracy,” she said. “I want to move forward and not back.”

Rush echoed Beard’s remarks about his Christian faith drawing him to the Democratic party.

Rowan County Democratic Chair Geoffrey Hoy credited the local Board of Elections for its competence and success in navigating voting during the pandemic. He noted a new state initiative called BallotTrax, a free service where voters can track the status of their absentee ballots. The service can be found on the state’s Board of Elections website at ncsbe.gov.

Gilbert encouraged local Democrats to sign up and spend at least one hour per week making calls ahead of the election, particularly as “every day is Election Day from here on out.” Additionally, locals can help put out door hangers to remind fellow Democrats and progressive Independents of the candidates on the ballot and encourage voters to formulate their plans for voting if they haven’t done so already.

She also said it’s important to check on voters as the nation grapples with multiple major crises.

Yard signs for both the Biden-Harris campaign and U.S. Senate candidate Cal Cunningham’s campaign will be available at the Rowan County Democratic Party office on Saturday, from 10 a.m. to noon. The office is located at 1504 W Innes St. Party officials ask that everyone wear a mask and socially distance, as well as donate or sign up to volunteer with campaigning.