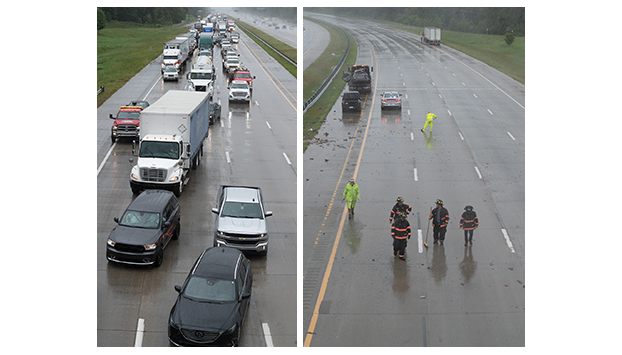 Josh Bergeron / Salisbury Post - At left, Cars were backed up on Interstate 85 north from Andrews Street, in the East Spencer area, to Innes Street after one of several car crashes caused by wet weather. On right, firefighters and emergency personnel work on cleaning up the wreck that caused the backup.

SALISBURY — As rain pelted Rowan County for much of Thursday, there were vehicle crashes that led to the temporary closing of Interstate 85.

Emergency responders were busy much of the day with one collision that occurred in the 81000 block of I-85 and initially reported as an entrapment. While it turned out not to be an entrapment, according to Interim County 911 Chief Lonnie Owens, one person was taken to the hospital. 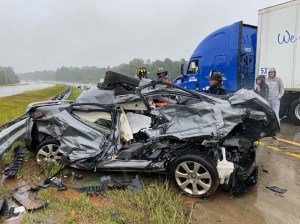 Submitted photo. Miller’s Ferry Fire Department was called out Thursday to an accident in the 79000 block of southbound Interstate 85. The wreck around 12:45 p.m. was one of many as the rain rolled in.

Another person was taken to the hospital following a vehicle accident under the bridge at exit 79. Initial reports indicated this was a multi-vehicle collision, but it wasn’t immediately clear how many vehicles were involved in the crash.

For a time, the interstate was shut down so emergency personnel could respond to two accidents close together, with one on I-85 near Innes Street. It was a confirmed pin-in and the vehicle overturned. The shutdown caused backups for miles. Emergency responders also traveled the interstate in the opposite direction in order to get around accidents and assist personnel elsewhere.

There were other accidents at Old Beatty Ford Road, south of Peach Orchard Road and near Long Ferry Road, which was reported as a pin-in and later confirmed it was not.

Rowan-Salisbury Schools ships out thousands of old devices for…