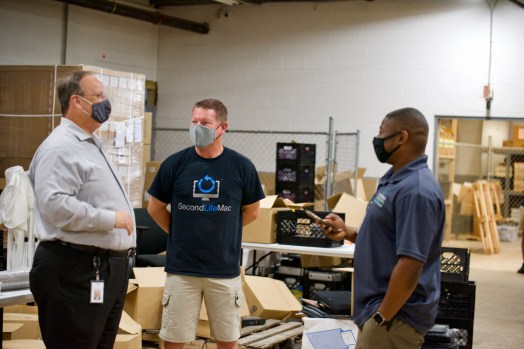 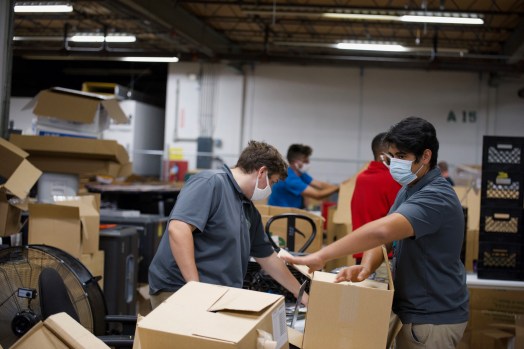 Carl Blankenship/Salisbury Post - Nathan Pressley and Edward Alonzo breaking down boxes as the first shipment was being prepared on Wednesday.

SALISBURY — A Rowan-Salisbury Schools warehouse on Wednesday turned into a logistics center for iPads, laptops and Apple devices as staffers packaged about 10,000 old devices, or about 26 pallets, on a truck.

The devices are bound for Second Life Mac’s Skokie, Illinois, headquarters, where they will go through the company’s refurbishing process. That includes being cleaned, wiped, repaired and inventoried for resale on the secondary market. Second Life Mac is a company that specializes in education device buybacks and recently won an upset bid process to purchase the district’s outgoing wave of apple devices for about $4.6 million.

The bids came in high, something RSS Chief Technology Officer David Blattner attributed to the increased demand during the COVID-19 pandemic.

Second Life Mac Procurement Manager Stephen Howser said this has been the company’s busiest quarter. It is experiencing high demand and has had to adapt to COVID-19 with a touchless collection system for families.

Howser said the the pickup looked a bit different than normal because it has been worked around a pandemic, with some students in remote-only learning and others attending class only two days a week. Howser pointed to the touchless system, which takes devices away on a conveyor belt, as something that has revolutionized how the industry picks up devices during the pandemic. The district built safety and an extended timeline into the bid for the buyback and delayed collection into September to not over-complicate the beginning of classes.

“Apple devices hold their value. So, when a district is looking to refresh and get new Apple devices, we then come in and purchase those devices, enabling the district to purchase new technology,” Howser said.

The district’s new devices, which come at a total cost of $12.3 million, will stick around for at least three years. The sale of devices to Second Life Mac will cover a year on the new lease.

Howser said the company has made other buybacks of this size and pointed to the logistics of a pickup, hauling away 22,000 devices in two weeks, as a product of a good working partnership with the district.

Michael Dumas, the district’s technology delivery manager, oversees getting devices out to schools and getting repair technicians out to schools. For the pickup process, the district creates a schedule for collection and deployment of new devices. Technicians are scheduled to be at schools to swap out devices from students. Those devices are packed and brought to the department. That’s where they can be scanned and packed into larger boxes for shipment.

“This is one of the busiest times,” Dumas said Wednesday.

Blattner noted the entire process normally takes about a week-and-a-half, but that has been drawn out to about a month.

At this point, Blattner said, most students in the district have their new devices. Devices not yet turned in will be deactivated. They will display a message telling anyone who turns on the device it is property of RSS and needs to be returned.