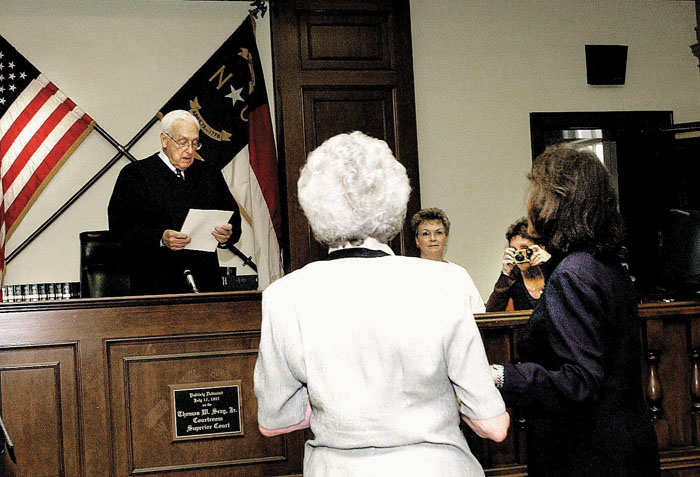 SALISBURY — Upon hearing of his death, judicial colleagues remembered former Judge Thomas Seay as a man who was stern, sometimes demanding and always fair.

Seay, who was 94 at his death on Tuesday, began his law practice in his native Salisbury and served as a prosecuting attorney and a judge from 1958 to 1960. He went on to serve two terms in the N.C. Senate from 1963 to 1966 and was appointed resident Superior Court judge in 1967, a position he stayed in until his 1998 retirement.

“He had a reputation that was well-deserved, of knowing a whole lot of law. He had an exceptionally sharp mind and he never forgot anything,” said local attorney David Bingham.

Bingham recalled Seay as a judge who expected the lawyers appearing in front of him to be as good as he was.

Bingham noted that Seay loved his late wife, Martha, known to many as Patty.

“He always called her, ‘she who must be obeyed.’ I never saw him mention her name without his eyes lighting up,” Bingham said.

In 1985, she was fresh out of law school and began practicing law as one of the few female lawyers in the county along with Janet Ward Black and DSS attorney Bonnie Busby.

“I was absolutely terrified of him and remained that way for a number of years,” Wagoner said.

She said Seay “did not suffer fools or unprepared lawyers lightly or those out-of-county ‘foreign’ lawyers.”

“As time passed and I became a Superior Court judge, as he was, we became better friends and sat together at most Bar (Association) functions and meals. We will not see the likes of him with his passion, pointed questions and expectations of perfection again,” Wagoner said.

Wagoner recalled working with Seay and then-District Attorney Bill Kenerly to plan for the courthouse expansion and to solve courthouse problems.

“Judge Seay loved this county and our courthouse. His passing signifies another loss of a giant of the old guard judiciary,” she said.

The county is better after having “been schooled” by Seay, she said. And as a symbol of his impact on the local judicial system, the Rowan County Superior courtroom, where he once presided, is named in his honor.

Kenerly credited Seay with the way he operated as a district attorney.

“He believed in court operating formally and expected people to be prepared,” Kenerly said.

Seay attended Spencer schools and was a graduate of Spencer High School in 1946. He served in the U.S. Army from 1944 to 1946 and, upon discharge, re-entered Duke University and received a bachelor’s degree in 1949 and a law degree in 1952 from Duke University Law School.

He was also a member of Central United Methodist Church and the Kiwanis Club of Salisbury, where he was the club’s longest active member.

An email from Kiwanis Club Treasurer/Secretary Rick Eldridge said Seay was looking forward to being able to return to regular club meetings.

“We will certainly miss him there,” Eldridge said.

A graveside service will be held 1 p.m. Saturday at Rowan Memorial Park. Military honors will be provided by the Rowan County Veteran’s Honor Guard.

Memorials may be made to Central United Methodist Church, 200 Fourth St. in Spencer.

Services are under the direction of Summersett Funeral Home.