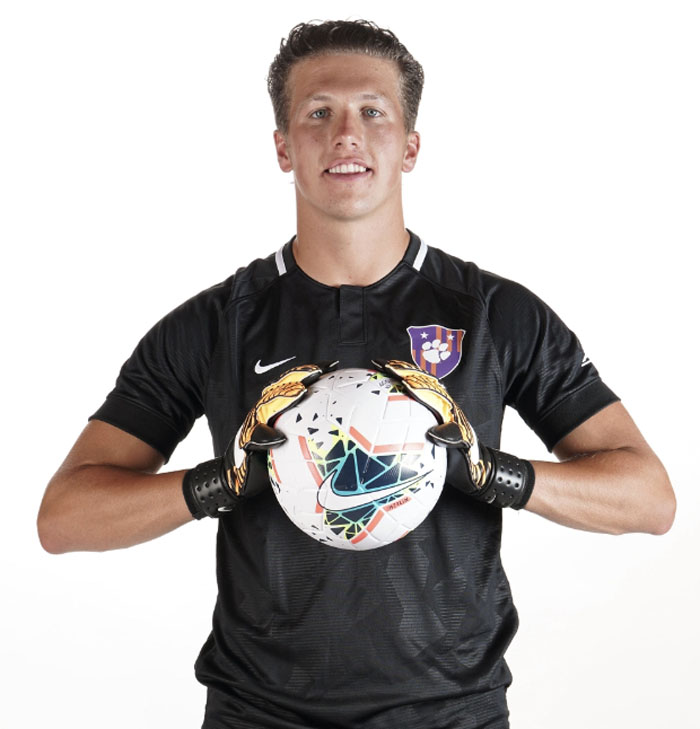 CLEMSON, S.C. — Clemson soccer’s season-opening matches with Wake Forest and North Carolina have been postponed due to a small number of positive tests for COVID-19, but Salisbury’s Max Fisher will be part of the team when the Tigers do get started.

Clemson’s debut is now scheduled to take place at South Carolina on Oct. 1.

Fisher, a goalkeeper, was the starter for most of the Furman Paladins’ matches in 2019. He’ll play as a graduate student at Clemson.

Fisher got started in the sport on the fields at Salisbury Community Park, where he was coached by his father, Steve Fisher, and by Frank Cardelle.

Max played two seasons (as a freshman and sophomore) in goal for coach Matt Parrish’s Salisbury Hornets. Salisbury went 45-4-1 those two seasons, including the 2013 2A state championship. He was the first freshman to start in goal for Parrish’s highly successful program.

Then Fisher played two years in the U.S. Soccer Development Academy for NC Fusion. Furman recruited him after seeing him in action in a showcase event in Florida. He also received scholarship offers from James Madison and East Tennessee State.

As a true freshman backup, he made four starts in goal for Furman in the fall of 2016. Those starts included a scoreless draw with East Tennessee State that went in the books as his first career shutout.

But he didn’t play at all for the Paladins in 2017 after suffering ankle and shoulder injuries.

He returned to the pitch in 2018 and played in two matches.

His breakout at Furman’s Stone Soccer Stadium came as a senior in 2019. He started 15 of Furman’s 20 matches, posted a goals against average of 1.6, had four shutouts and was voted MVP by teammates.

Fisher was in goal for most of Furman’s match against a traditionally stout Clemson team and performed admirably in a 2-0 loss. That showing would help lead to his future opportunity to play for the Tigers.

Furman was upset in the semifinals of the 2019 Southern Conference Tournament by Mercer, but Fisher played so well (seven saves) in an overtime loss that he was named to the all-tournament team.

He was then accepted to Clemson’s School of Engineering where he is pursuing a masters degree in mechanical engineering.

He’d only been on the Clemson campus a short time when he got a call from Clemson coach Mike Noonan about playing for the Tigers. Fisher still has a year of eligibility due to his 2017 medical redshirt. After a couple of meetings and a tryout, he was officially a Tiger. He’ll wear the Zero jersey.

Clemson returns starting goalkeeper and recently named team captain George Marks, but Fisher’s experience will no doubt prove an asset to the Tigers.

“It has been a long journey starting out on the Salisbury Community park fields, to Ludwig Stadium at Salisbury High School, to Stone Stadium at Furman University, and now to historic Riggs Field at Clemson University,” Fisher said.  “Being able to compete in the best soccer conference in the nation, the ACC, is truly a blessing.”

Clemson was 18-2-2 last season and has been named the preseason favorite in the ACC.

All Clemson fall sports athletes are being tested three times per week for COVID-19, per ACC protocol.