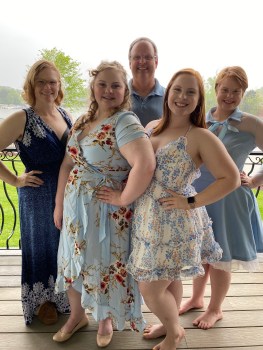 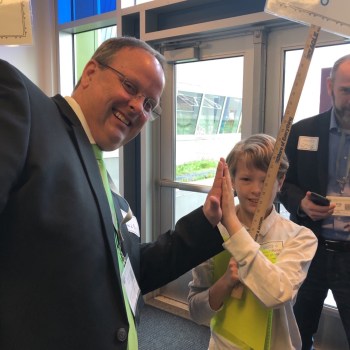 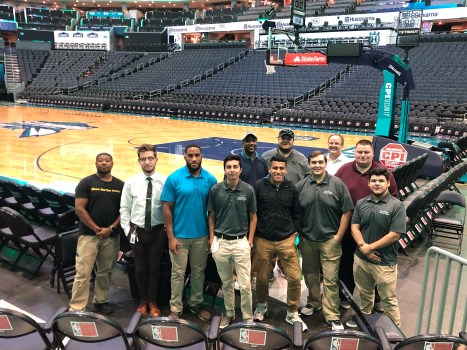 The Rowan-Salisbury Schools chief technology officer moved to North Carolina from California on with his wife on a whim in the ’90s. Blattner had graduated from San Diego State University with an education degree, and the couple had been married for three weeks when they made the move.

Contrary to the kind of bookish image associated with an typical English, Blattner never shied away from working technology into his classes at South Iredell High School. His first computer was an Apple II and he grew up interested in tinkering.

His father worked for Bell, but Blattner said that connection did not bring extra technology into the home.

When he started teaching, dedicated technicians in schools were unheard of, so Blattner found himself taking on extra responsibilities. Namely, he was troubleshooting technology in front of his classes while teaching English.

Since technology is part of who he is, he found it easy to worked technology into his teaching. He introduced students to web design as a substitute for a research paper.

As he moved along, technology seemed to find him more than he found it. These days technology is his job.

Inspire CIO, a national peer-review organization, tapped Blattner for its Education CIO of the Year award for the Charlotte area. To win, a candidate has to be nominated by another CIO and voted to the top by peers. Blattner said he was a finalist before when he was CIO for Iredell-Statesville Schools.

Blattner said the awards event is usually a big to-do with hundreds of people, but because of COVID-19 the ceremony was migrated to a virtual setting. There were virtual tables to move between and a virtual main event for the award presentation.

Blattner said at a conference of CIOs there were still technical difficulties and that hiccups with technology will probably always be inescapable. There were some issues with a couple of folks getting connected, but by the end they were able to give their speeches.

Blattner gave credit to his team, saying a lot of people work hard to make sure the district’s projects come to fruition.

“It’s more an award for us than it is for me,” Blattner said. “I’m honored to be the one that gets to accept the award.”

Blattner said getting the award this year was extra special because everyone has dealt with adversity amid the COVID-19 pandemic. Blattner has overseen the sale of the district’s old devices, rollout of new devices and deployment of devices to more students than ever.

Blattner pointed to getting internet access into as many homes as possible and ramping up the department’s device repair program with drive-thru depots as additional challenges during the pandemic.

“There were a lot of things, and we had to pivot, move and be flexible,” Blattner said.

Blattner has been with RSS since February 2019. He spent the earlier portion of his career with Iredell-Statesville Schools ,where he was CTO six years, a principal and an English teacher. He also coached soccer.

Blattner said he was drawn to RSS because of renewal.

“I’ve always been one that likes pushing the envelope, thinking outside the box,” Blattner said.

“Coming from the education side, not always technical, helps me think about what is happening in the classroom,” Blattner said.

These days, students spend most of their time out of the classroom and engaging through technology, so Blattner does not see technology as just the nuts and bolts behind the scenes.

Corey McNeil is lead teacher of instructional technology for the district. He supports the technology facilitators in schools, helps support teachers and works on the infrastructure side as well.

McNeil pointed to how collected Blattner stays focused in the face of emergencies, even during the onset of the COVID-19 pandemic, as a major strength to his leadership.

“It is very difficult to rattle him,” McNeil said. “I like that and I appreciate that.”

McNeil said Blattner trusts the staff to carry out plans set in place and does well delegating responsibilities in the department. He is not surprised Blattner won the award and thinks it is a great representation of his leadership.

Blattner holds a master’s degree from Gardner-Webb University and a doctorate from Wingate University.

He spends a lot of free time involved in community theater in the Mooresville area. He has three daughters who all act and sing. He helps organize shows and build sets for musicals, spending a lot of time working with tools and teaching others how to build things.