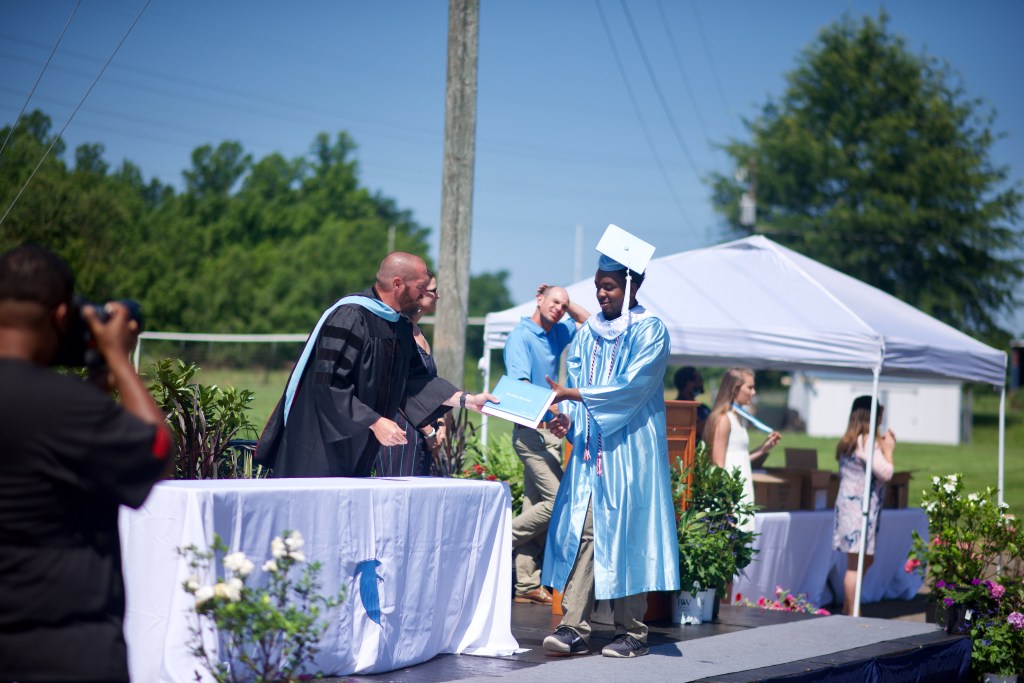 Carl Blankenship/Salisbury Post - Brandon White receiving his diploma from West Rowan Principal Jamie Durant during a drive-thru graduation event in 2020. Graduates stepped out of vehicles and walked across the stage.

SALISBURY — Rowan-Salisbury School’s graduation rate made a significant jump in the 2019-2020 school year, past the state average and more than a statewide increase.

Kelly Burgess, RSS director of accountability, said remote learning and modified grading at the end of last semester may have hurt some students and helped others graduate, but pointed out the district did not just see an increase. Under the same framework, Rowan-Salisbury Schools exceeded the state average for all public schools.

Henderson mostly serves students who have serious conduct infractions. Burgess said the small number of students at the school means they influence the graduation rate more, and the goal with Henderson is often to return alternative students to their previous schools.

The district has taken on other metrics for student success besides graduation and test scores, examining areas like social and academic skills of students as well as their plans after they graduate, but Burgess said the rate is still a good data point that shows the outcome of what the district is doing.

“While some non-renewal districts may work to increase graduation rate by increasing test scores, I think what RSS is doing is a more comprehensive way of going about it,” Burgess said.

Just getting the number can be a challenge. There’s a whole manual on how to do it, but it’s generally the rate at which students graduate after four years in high school. When a student begins ninth grade, the clock starts ticking on whether he or she will boost or lower the percentage four years later.

Carson Principal Benjamin Crawford attributed the high and climbing rate at Carson to the culture at the school and the expectation that students will be successful when they get there.

Crawford has only been principal at Carson for a year and does not take credit for work that has been going on at the school for years. He offered an analogy for the school’s mentality.

“How successful would UPS be if 90% of the packages that they shipped got where they need to be?” Crawford asked. “That would be unacceptable for a company like that. So that’s our belief too. These kids are way more important than the packages that UPS is shipping. We have a job to do, which is to take them from point A, walking in the door, to point B, which is graduation.”

He gave credit to other staff, particularly support roles like school social workers and counselors who are part of building that culture.

Crawford pointed out the challenge is often reaching students who are at risk, not those who would graduate with no intervention on the part of the school, which makes up what on paper is a few percentage points but could account for a large number of students who slipped through the cracks.