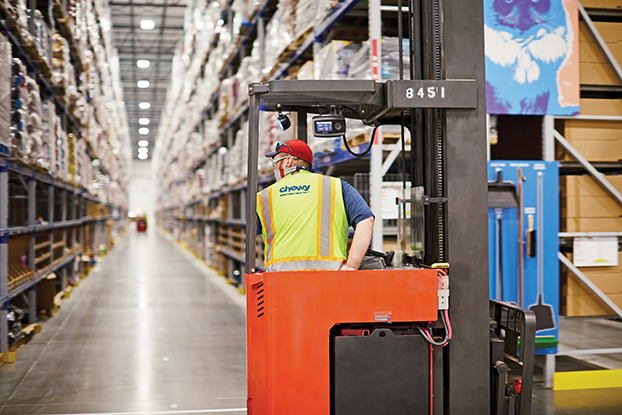 Operating a forklift is one of the many duties of a fulfillment specialist, who helps ensure that the company is able to deliver pet product orders in a timely fashion. Photo courtesy of Chewy.

SALISBURY — When Chewy in 2019 announced its arrival into Rowan County, it projected the company’s fulfillment center would create 1,200 jobs by 2025.

Since officially beginning operations on April 6, Chewy says it has already surpassed that mark.

“We’ve scaled the site from our first hiring group, which was 20 team members, and we’re now over 1,200,”  said Gregg Walsh, vice president of fulfillment center human resources for the online pet product retailer.

“I think it’s great that they’ve gotten to 1,200 people this quickly,” Crider said. “Those people will have nice steady employment over a period of months and will not have any downs so that’s really good.”

Those 1,200 positions are occupied by employees serving in a variety of roles, from forklift drivers to human resource administrators. Several of those workers are acting as recruiters who will help the fulfillment center add even more employees in the near future.

“We’re expecting to hire another 200 or more positions through the end of the year,” Walsh said. 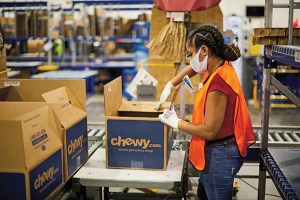 Orders handled by the Chewy fulfillment center will end up on porches and at door steps across the country, but primarily in the southeast and Atlantic Coast. Photo courtesy of Chewy.

With an accelerated shift to online shopping spurred by the COVID-19 pandemic, Chewy has seen its business pick up over the last several months. In a recent earnings report, Chewy reported that it reached $3.3 billion in sales during the first half of the fiscal year, a 47% increase from its sales for the first half of fiscal year 2019.

That uptick in business forced Chewy’s Rowan County fulfillment center to get onboard and up to speed swiftly.

“It was a very fast ramp,” Walsh said. “Obviously, with COVID, we ramped the site very quickly. The obvious impact this year is that people have stayed home as part of their social distancing and there had already been this shift to online shopping, but with people being at home there was a large increase in pet adoptions and we saw this large acceleration in this shift that was already underway.”

Walsh said that Chewy has been pleased with the available workforce Rowan County has had to offer, which is one of the primary reasons why the company decided to locate its 700,000-square-foot fulfillment center in the county to begin with.

“The combination of Salisbury’s great labor market and available real estate and positioning in the right part of the country for our network made it a great match,” Walsh said. 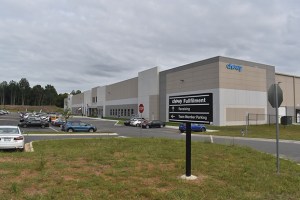 The Economic Development Commission worked with educational partners such as Rowan-Cabarrus Community College to equip the county’s workforce with the skills to land jobs at companies like Chewy. That included forming a program designed to certify students in logistics. Those efforts, Crider said, are paying off.

Crider said that during a recent meeting Walsh and Chewy representatives were complimentary of the workforce that they’ve tapped into.

“It’s gratifying to know that they’ve recognized the initiative put forth by the community and Rowan-Cabarrus Community College, who put together a program specifically to meet these needs,” Crider said.

The fulfillment center, Chewy’s ninth such facility in the United States, ships online orders of dog food, cat toys and more across the country, but it primarily serves the Southeast and Atlantic Coast region.

For more information on available openings at the Chewy fulfillment center, visit www.chewy.com/jobs.