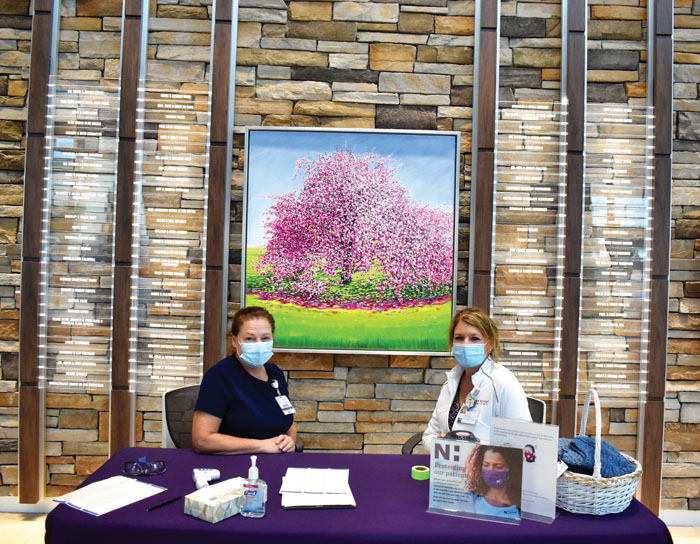 SALISBURY — After beginning his artistic career in Salisbury decades ago, Rowan County native Kevin Moss is now giving back to the community where he got his start.

As a student at Salisbury High School, Moss was a sought-after football recruit for schools along the Atlantic coast. His play on the field earned him the chance to compete at the next level for a number of ACC institutions, including Duke. However, Moss wasn’t set on playing football. He wanted to be an artist.

His passion for painting found its spark in the cathedral of St. John’s Lutheran Church on West Innes Street. When Rambusch, a New York-based lighting and art company, came to Salisbury to paint the church’s ceiling, Moss scored a job working on the project. After proving himself as an adept artist while painting St. John’s ceiling, Moss continued to work for the company intermittently throughout his college career at Virginia Commonwealth University.

“I would come up on Christmases and in the summer and work when I was in college,” Moss said. “When I graduated from college, I came (to New York) and just started painting church ceilings with them.”

Moss was skilled at transforming church ceilings into beautiful expanses of color, but he also found success in New York as a artist in his own right. Some of his paintings have landed in The Metropolitan Museum of Art, The Brooklyn Museum and the Cleveland Art Institute.

When Rick Parker, executive director of the Rowan Medical Center Foundation, was in the process of looking for art produced by local artists to fill the newly opened Wallace Cancer Institute, Moss’ name was brought into the conversation by Margaret Basinger.

“I started Googling him and found that he lives, resides and works in New York City,” Parker said. “From that introduction, it led to a desire by Kevin to make a gift of one of his paintings to the Wallace Cancer Institute in support of the cancer care that it would be providing.”

The painting that Moss donated to the Wallace Cancer Institute isn’t the first piece he’s gifted to a medical facility. Inspired by his wife’s long battle with cancer, he also donated a piece to the Nantucket Cottage Hospital in Massachusetts.

During his wife’s treatments, Moss spent a lot of time walking the halls of hospitals. He knows firsthand how difficult it can be for a family to go through cancer treatment. When he set out to paint the piece he donated to the Wallace Cancer Institute, Moss said he wanted his work to give patients a breath of hope. He’s titled the piece “Bloom Where You Stand.”

“I wanted to give some joy to the patients and the people that work there,” Moss said. “That’s what it basically is: something to give comfort and hope.”

Moss completed the painting in his New York studio and had it shipped down to Salisbury, where it was hung in a floating frame by the staff at Fine Frame Gallery. It was placed on the wall in the Cancer Institute several weeks ago and Parker said that it’s already provided the building with a lift.

“It’s been very positive reinforcement. The painting captures the essence of life in the cherry blossom tree,” Parker said. “It signifies spring and renewal. It’s hopeful.”

Colorful paintings created by local artist Clyde are waiting to be hung in the Wallace Cancer Institute. Ben Stansell/Salisbury Post

Along with Moss’ centerpiece painting, Parker has collected artwork from other local artists, such as Clyde, Cynthia Shaw, Sean Meyers, Terry Brewer and Miles Smith. Those pieces will be placed in the Wallace Cancer Institute in the coming weeks.

“The art is therapeutic,” Parker said. “A lot of these pieces are going to go into treatment rooms and exam rooms. When you go in there, it could be good news, bad news, maybe just a check up. Hopefully we’ll give you something to de-stress you.”