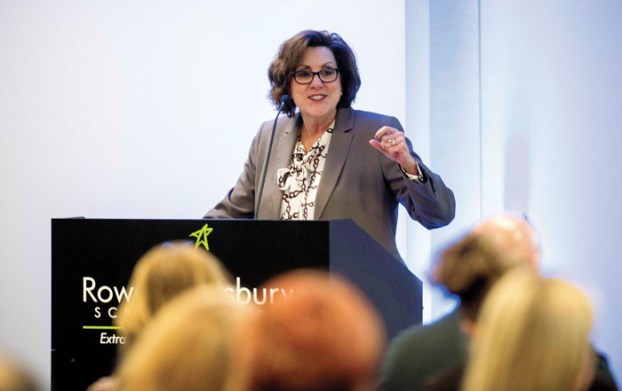 Rowan Salisbury School System Superintendent Dr Lynn Moody gives a state of the district update to school employees Feb. 5 that was broadcast to all of the schools.

SALISBURY — Rowan-Salisbury Schools Superintendent Lynn Moody on Monday night announced she will retire at the end of the year.

Moody, who has led the district since 2013, plans to retire on Dec. 31, according to a message sent to all staff. Moody said it felt like the right time to retire and thanked the school board for how long she has spent as superintendent. Moody noted superintendents usually only stay with districts for two or three years.

She told the Post it is a good time to retire because a January start lets a new superintendent get to know the district before he or she starts making preparations for the next few years. Moody also pointed to renewal as project to “take to the next level” over the coming three to five years.

Moody said she will miss her colleagues terribly, loves her relationship with the leadership and pointed to the success of the team implementing a good one-to-one device policy. She noted the device plan as well as the directional system for renewal as good situations for a new superintendent to step into. Moody said she considered the decision to retire during the previous couple months. She was considering working for a couple more years, but placed a heavy weight on the timing of the decision.

Moody and her husband are not from Rowan County, and she said they intend to move. The couple has two granddaughters in Texas with whom they hope to spend more time.

“I’m scared, I’m nervous, but I’m also excited about it,” Moody said, adding her retirement plans for the next few months are to “chill out” and decide on next steps

Moody said the COVID-19 pandemic is not the reason for her retirement and that she thinks the re-entry has gone well for RSS. However, Moody said the decision to advise the school board about how to restart classes amid the pandemic was the most difficult one she’s made as a superintendent.

Moody also dispelled the idea she may be leaving because of school closure talks. Moody has publicly advised the board to consolidate schools because of costs to operate aging facilities with dwindling student populations.

Ask us: How does Rowan County government collect property taxes?

Editor’s note: Ask Us is a weekly feature published online Mondays and in print on Tuesdays. We’ll seek to answer your... read more