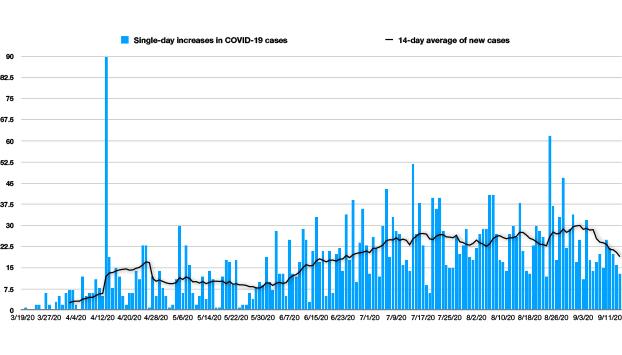 This chart, using data from the Rowan County Health Department, shows the progression of COVID-19 cases in Rowan County, with the blue bars showing daily increases in new cases and the black line showing the 14-day average. The average of new cases reached a peak in early September before starting its recent decline.

After reaching a peak near the beginning of the month, the average of new daily COVID-19 positives has dropped continuously.

The 14-day average of new cases, a metric also used state health officials and Gov. Roy Cooper use to determine whether to lift restrictions, peaked Sept. 2 at about 30 per day. That’s due to new cases increases coming in the mid or low teens. Cases on Sunday and Monday, for example, increased by 16 and 13, respectively.

As new cases have slowed, local demographic data remains relatively unchanged. Women make up a majority — 53.3% — of cases among Rowan County residents. The 18-35 age group has a plurality of cases, at 920. The 36-50 age group is next-highest, at 706. Hispanic Rowan Countians continue to be disproportionately affected by the outbreak, with 29% of all positives.

Statewide, there are 185,781 lab confirmed cases, 2.63 million completed tests, 895 people currently hospitalized and 3,060 dead. Of those who have tested positive, 167,257 statewide are considered recovered.