Volleyball: Sense of purpose for West 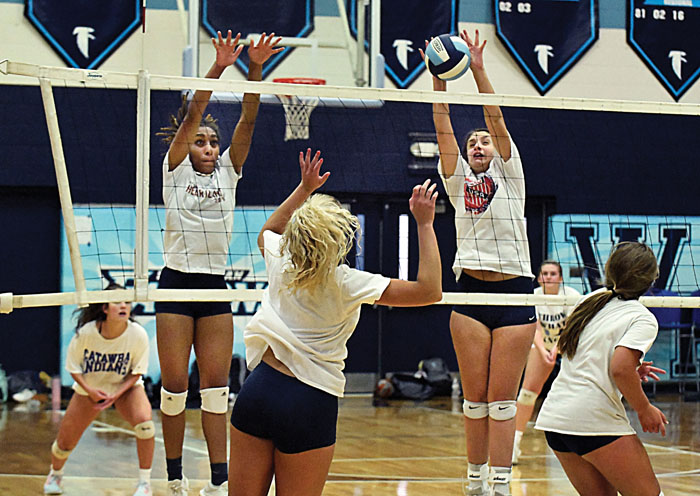 At the net facing camera DeDe Cuthberson and Emma Gaeta. Back to camera Kaylin Dowling. photo by Wayne Hinshaw

On Friday, she was trying to teach that class virtually, which sounds like a challenging proposition.

Much of her enjoyment as a teacher comes from coaching a volleyball program that is a sweet 67-13 the last three years. That includes 28-1, undefeated conference champs and regional finalists, in the fall of 2019.

Volleyball and cross country will be the first NCHSAA sports to return, if all goes well. Fingers are crossed. So far, so good.

Dowling is familiar with several COVID-19 cases personally, some serious, but the pandemic has not impacted the health of her team.

The first official practice won’t be held until Nov. 4.

“Volleyball tryouts won’t be until November, but we’re working out with the returning girls as well as some jayvee girls and freshman girls who have a chance to make our team,” Dowling said. “We only have workouts twice a week (Tuesday and Thursday) because I don’t want them to over-do it. They are super-pumped about being back in the gym and they’d go at it hard every day if it was up to them. I have to do what I can to save them from themselves.”

Dowling said those two days a week, when the Falcons work on general conditioning as well as volleyball-specific drills, are huge not just for her, but for the girls.

“When you’re an athlete, playing sports is your life,” Dowling said. “This is what these girls do. They love competing and they love being around each other.”

The Falcons also spend time every week getting quicker and more athletic in workouts supervised by former West football superstar K.P. Parks at the Defenders Sports Academy in Cleveland.

The Falcons get screened and tested for COVID-19 every day when they walk into the school, but there have been no issues.

Practices are pretty normal. Players move briskly from drill to drill. The weight room still isn’t open yet, but that green light could come in the week ahead.

Dowling said it’s an honor and a privilege for volleyball to be at the forefront in the return of high school team sports in North Carolina.

There’s going to be even more interest than usual in volleyball, and there’s already been major interest in the sport at West in recent seasons. The Falcons played a string of home playoff matches last season in front of massive crowds, with student sections rivaling the basketball glory days.

“I know the girls are super-excited about being first this fall,” Dowling said. “With no football, we’ll be playing most of our games on Friday nights. It will be a great way for us to get the West community involved in sports again.”

West graduated a once-in-a-generation player in Tori Hester, who is now a freshman at Troy. She was arguably the greatest hitter not only in West history but in Rowan County history. She was the ultimate air traffic controller. It was usually bump, set … and decapitate for the Falcons if they could get it to Hester.

Hester can’t be replaced by an individual, so it has to be a collective effort if the Falcons are going to maintain the level they reached last fall.

“We’ve talked about that, and as proud as we are about what we accomplished in 2019, that’s over and it’s done and this is a different team,” Dowling said. “The challenge in front of our girls is showing everyone they can still be a great team without Tori, and they are eager to embrace that challenge. They either can be remembered as the team that wasn’t as good as 2019 was or they can be remembered as the team that was even better. I know how they want to be remembered.”

West won’t be able to approach the school-record 28 wins of 2019 because there’s a limited 14-game, seven week schedule. Those 14 games include the North Piedmont Conference Tournament.

West will play 10 regular-season NPC matches (five opponents, twice each) and two non-conference matches before the league tournament. The playoff schedule is crammed into an 11-day period from Jan. 12-23, and January is ordinarily not the friendliest weather month.

“We’ve already talked about the shortened season and the importance of every single game we’ll play,” Dowling said. “There won’t be any warmups for us.”

The first game will be significant. West volleyball plans to debut against county and conference rival East Rowan on Nov. 17.

Dowling said the player who has made the longest strides since fans last saw the Falcons in action is Kelcie Love.

Love, a 5-foot-11 junior, has been known mostly as the sister of UNC baseball pitcher Austin Love, but she’ll transition from role player to star in 2020. Dowling has no doubt about that.

“Kelcie made a decision that volleyball is what she wants to do and she’s slimmed up, she’s jumping higher and she’s hitting the ball just as hard as Tori did,” Dowling said. “I’m excited that she’s going to have  a chance to show everyone how hard she’s worked. She’s kind of shocked everyone in our workouts. People are going to be wondering where did this girl come from. She’s been with us. She just hasn’t been with us like this.”

Senior KK Dowling, the coach’s daughter, was one of the county’s top handful of players last season.

“KK has gotten some college offers to pick from, but it’s been tough for a lot of the girls who want to continue to play volleyball in college,” Dowling said. “Their club volleyball seasons got cut short. Then they couldn’t go to any camps this summer. Most volleyball recruiting is done through the club teams, not from seeing the girls play in high school.”

Dowling also coaches track and field and is still aggravated about losing that season last spring to COVID-19.

“I think all our seniors have come back to the gym with a sense of purpose,” Dowling said. “They know how quickly sports can be taken away and they know how important sports are in their lives. They’re going to be taking this volleyball season to heart.”

Cross country: Runners happy for a chance to compete