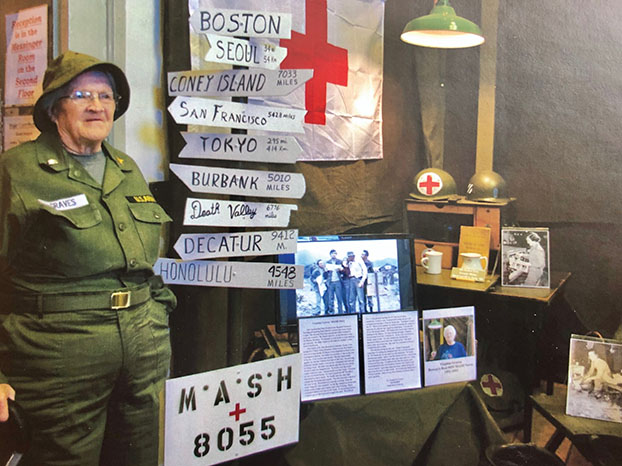 Virginia Graves educated visitors at the Rowan Museum on the 60th anniversary of the armistice that ended the Korean War in 1953. Photo Submitted.

SALISBURY — Even after working as a nurse in the Korean War and caring for patients in the W.G. Bill “Hefner” VA Medical Center for decades, Virginia Graves wasn’t done serving people.

That’s why she was excited to join the Nursing Home Advisory Committee, a group tasked with advocating for those in nursing homes in Rowan County. Graves served on the committee for 29 years, meeting with nursing home directors and patients and writing reports on her findings to ensure that the best level of care was maintained.

Graves, 90, was honored for nearly three decades of public service during the Rowan County Board of Commissioners meeting on Tuesday. Graves, now a resident at Autumn Care of Salisbury, was surprised with the proclamation on a Zoom call with commissioners.

“It was long overdue,” said Melissa Pierce, who served alongside Graves on the Nursing Home Advisory Committee. “I think someone who is that dedicated deserves some type of community recognition.”

A native of Derita, now a neighborhood in Charlotte, Graves lived a full life before moving to Salisbury. After graduating from high school, Graves joined the U.S. Army as a nurse and worked in a mobile Army surgical hospital in the Korean War.

Once she was discharged and returned to her home state, she found a job at Salisbury VA Medical Center in 1954. She cared for patients there for several decades. After retiring in the 1980s, Graves didn’t want to stop caring for people.

Graves quickly became a staunch and dedicated advocate for those in nursing homes, spending hours chatting with them about their living conditions.

“She always saw a need for it, working with patients and the VA and being a nurse all her life. She saw a need,” Pierce said. “She knew some of these people couldn’t speak for themselves or didn’t feel comfortable and needed someone else to help them make complaints or voice concerns. She always saw that as a great need in the community.”

Her ability to communicate with residents was always one of her greatest strengths and it helped the committee form an accurate opinion of local nursing homes.

“She was always so funny. She would go in there and talk to the residents and the first thing she would ask would be ‘Well, how’s the food?’ That’s very important when you’re in a place like that,” Pierce said. “The small things are very important and they really enjoyed talking to her.”

Despite facing health issues of her own, Graves continued to work on the Nursing Home Advisory Committee until a few months before the COVID-19 pandemic began.

“Even as her health was declining, she would still visit the nursing homes with her committee members and residents in the common areas if she was unable to visit them in their rooms,” said Patricia Garner Cowen, the regional long-term care ombudsman for Centralina, who oversees the committee.

Few volunteers have served on county advisory committees or boards as long as Graves did.

“She always said ‘I’m not going to stop.’ It’s because we’ve always had a hard time getting people to do it,” Pierce said. “Nobody could ever replace her. We hate to lose her now.”

The county will look to replace Graves on the committee, but finding a member as dedicated may prove to be difficult.

“Only God knows the plan he has for each of us and many of us may find ourselves in a nursing home. If that happens, we can only hope there is a Virginia Graves to be our voice and to look out for our best interests,” said County Clerk Carolyn Barger, who’s typically shy about commenting for stories but has a heart for citizen boards like the nursing home advisory committee. “Perhaps this should prompt us all to consider volunteering our time to help carry the torch Virginia has carried.”

Although Graves wasn’t native to Salisbury and didn’t have any family in the area, she became family to Kim and Kenneth Lance. Graves met them while attending church at First Baptist in Salisbury, where Kenneth served as pastor for 17 years. Graves and the Lances have grown close as they’ve spent holidays and special occasions together. Kim was excited to see Graves honored for the countless hours she spent serving on the committee.

“I think it was well-deserved and she seemed to be really happy with it,” Kim said.

For more information on the Nursing Home Advisory Committee, email PCowan@centralina.org or contact Barger at 704-216-8180.

Graves’ memoir, “Always In White: The Story of a Nurse and Servant of Christ,” can be found on Amazon.com.