‘We need somebody to care about us:’ Former addict uses past to help others heal from addiction 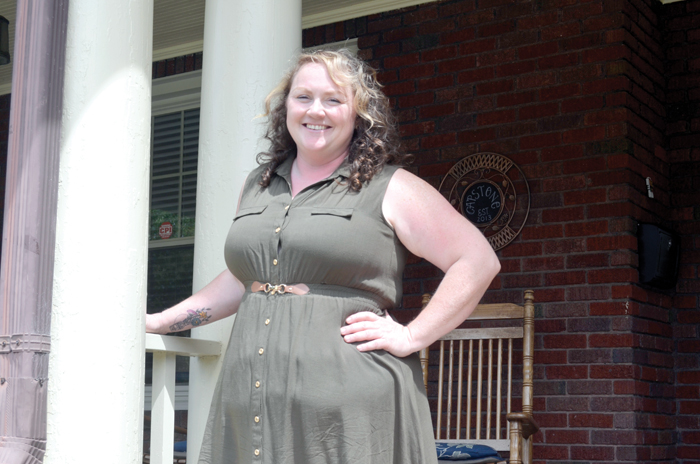 SALISBURY — Ashley Creek fought the effects of childhood trauma for years with a daily onslaught of heroin, meth, crack cocaine and alcohol, but today she helps addicts find a better path.

“I was just waking up every day and was like, ‘I don’t want to feel anything,'” she said.

Creek doesn’t excuse her choices but says she felt as though it was the only way she could survive. However, her addictions were crippling. Creek told the Post she wasn’t really functioning.

She was 30 years old when she realized that her lifestyle was not working. She’s since made a turnaround and is now a certified peer support specialist with the Rowan County Public Health Department’s Post Overdose Response Team (PORT).

Creek has previously spoken at the county’s opioid forum and shared her story at other local events.

“I don’t really have a lot that I keep hidden anymore or that I don’t mind talking about because it’s all for a greater purpose. You know shame is what kept me hidden for many years and so I don’t allow shame to dictate my life anymore,” Creek said.

She sought help from Capstone Recovery Center, a Salisbury-based transition center for women. The center helps women recovering from substance abuse and offers them counseling, life skills and other tools to help them work through and overcome their addictions.

Creek said she had been sober for 16 months, and tried other programs that didn’t help as she was still struggling with suicidal thoughts and depression. She came to Salisbury in June 2018, and graduated from the Capstone program in March 2019.

“I spent two years and one month in rehab, total,” Creek said.

‘Deal with it and heal from it’

Nothing seemed to work originally, and when she hit a setback, it meant starting over. Other programs had not worked, and no counseling was offered. Instead, Creek said she was led to believe that her addictions stemmed from rebellion and were demonic.

“They emphasized that I just needed to pray it away and that’s what would help me,” Creek said.

She said one program did offer some helpful books to read, but she spent a lot of time alone. Her day was filled with classroom activities from 9 a.m. to 8 p.m.

“The difference, I think, here they acknowledged trauma, which is a huge key factor in recovery. You know dysfunction teaches us and society teaches us to pull ourselves up by our bootstraps and shove it under the carpet. But that’s really not helpful,” Creek said.

She said Capstone believed in getting to the root of her issues.

“You know you have a relationship with drugs and alcohol. You’re using that to run from something or to escape from something. So let’s figure out what that is, deal with it and heal from it,” she said.

Creek said Capstone was able to look at her past to understand she had post-traumatic stress disorder, and there were things that triggered her because of a violent past.

Creek said her trauma stemmed from her childhood. She grew up with two young parents dealing with addiction.

And her mother was only 16 when she began having children, but both of her parents had problems and dealt with life the best way they knew how.

“They were kids and they didn’t grow up in a very great home either. Neither one of them did,” she said.

Creek’s mother was mentally, physically and emotionally abusive and her father was in and out of her life. He was an absentee parent when she was younger. Her father had his own struggles with alcoholism and run-ins with law enforcement. Creek was raised by parents who were around other people who didn’t make good life decisions.

She noted the Adverse Childhood Experiences (ACEs) study, which looks at traumatic events that occur to children before age 18. According to the study, the rougher your childhood, the higher your score is likely to be and the higher your risk for later health problems.

By the time she was 16 years old, Creek left home and entered into a relationship with, and later married, someone she said was extremely physically, mentally and sexually abusive.

“There had been so much that happened to me before I was even 18 years old,” Creek said.

It wasn’t so much that she became an addict. It was that she was already an addict. She suffered an incredible amount of anxiety and depression, so she turned to alcohol and drugs to cope.

Creek was introduced at an early age to alcohol and marijuana. She admits she wasn’t fond of marijuana, but she loved alcohol and began using it regularly.

She got married for a second time. And this time, her husband was addicted to opiates.

In January 2016, her father was murdered, which was a wake-up call for her.

“If the drugs aren’t going to kill me, the lifestyle could kill me,” Creek said.

Six months later, she was arrested. It was in a jail cell that she had an encounter with God.

“He let me know then and there, ‘Ashley, you can’t let the abuse of your past dictate your future,'” she said, adding that God really showed her that she deserved better.

Creek said that experience is what woke her up to the possibility of a different kind of life.

Creek begged for God to either let her die or give her the chance to finally live. She realized she had never really lived, and she wasn’t the happy person she pretended to be.

Creek spent 36 days in jail before becoming homeless. She enrolled in her first rehab program, but she said it was ineffectively run, she said. She enrolled in another that she said was fear-based and dehumanizing. A third rehab didn’t work either and she landed at Capstone.

Creek said Miriam and Oscar Ramirez, who lead Capstone Recovery Center, saw something in her from the beginning. It was a matter of having someone say to her, “You can do this” and “You’re going to be great someday,” she said.

She began working at Capstone in resident services and helped with some office work. While there, Creek got her certification in peer support and was interning as a counseling assistant.

Creek joined Miriam Ramirez to attend other events, where she made connections and had the opportunity to share her story, including at the county’s opioid forum.

“She put me out there to immerse me in a different environment and” Creek began, “to show you that you could and that you count.”

Ramirez said what Creek was able to receive at Capstone that she didn’t receive at other rehab facilities was a chance to deal with her PTSD through counseling.

“Her mental health and life of recovery have improved beyond expectations,” Ramirez said.

Oliver said Creek has been instrumental in pulling PORT together. She recalled interviewing Creek for the position and immediately knew she was a perfect fit.

“She has walked in the shoes of those she serves,” Oliver said. “Since she is in recovery, she can fully relate and understand the many challenges and barriers someone who is using may deal with day-to-day. She recognizes these barriers or challenges and works hard to remove these roadblocks creating greater access to treatment, care and resources.”

Oliver added that one of Creek’s greatest strengths is seeing the positive in every situation.

“She uses that positivity to provide and build hope among the clients she serves and all she comes into contact with. We are lucky to have her on the PORT and as part of the health department team,” Oliver said.

Ramirez said Creek is helping women and men walking in the same shoes she once walked.

“Ashley plans to continue her education in a field associated with social services,” Ramirez said. “She visits at Capstone every week and gives the ladies that are presently in the program tremendous hope and inspiration of a victorious life of recovery.”