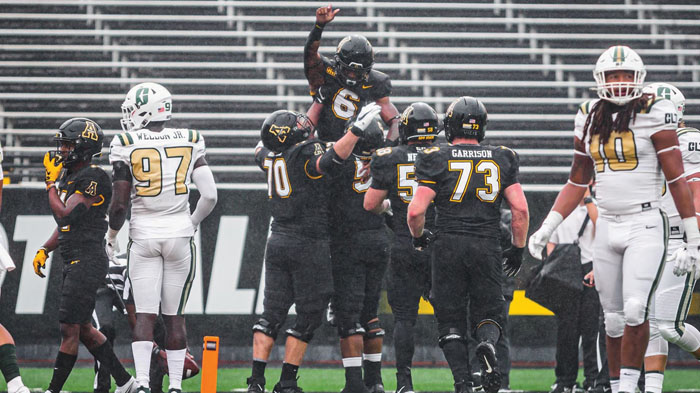 The teams exchanged big plays in the final two minutes of the third quarter. Hennigan scored down the right side after a defender slipped on the wet field. Aaron McAllister returned the ensuing kickoff a school-record 97 yards, breaking a tackle on the left sideline to get Charlotte within a point, 21-20.

Harrington went up the middle for a 4-yard score to extend the Mountaineers’ lead to 28-20 early in the fourth quarter. After a Charlotte fumble recovery, the Mountaineers held the 49ers to no yards at the Appalachian State 20 and Harrington added a 15-yard score with 1:15 remaining.

Herrington had 120 yards receiving. Marcus Williams Jr. ran for 117 yards and a score and Camerun Peoples added 102 yards and another touchdown. The Mountaineers rushed for 308 yards. Zac Thomas aded 204 yards passing with a TD and an interception.

Tyler Murray forced a fumble, recovered another and made an interception for the 49ers.

Due to state COVID-19 restrictions, the school allowed only 50 fans to attend the game, all parents of Mountaineers seniors, and tailgating was not permitted.