A brighter Bell Tower could be used to commemorate special events, show solidarity 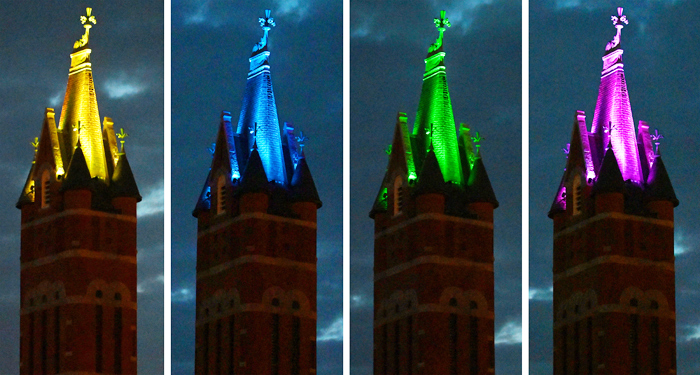 Andy Mooney / Salisbury Post LIghts were recently installed in the Bell Tower that have the ability to show a variety of hues.

SALISBURY — On the night of Tuesday, Sept. 1, the Bell Tower in downtown Salisbury lit up in an array of colors, transitioning from soft white to deep red, then moving to a rainbow-like glow of bright shades.

The impromptu light show wasn’t meant to show off the tower’s new abilities. It was just a colorful display of construction work as contractors stood on a crane near the spires of the town adjusting and testing the lights for the first time.

As the tower flickered between hues, Jason Walser playfully called out what each color could stand for, saying that the purple lights were “Novant Health purple” and that the vibrant green was for “St. Paddy’s Day.” Walser, the vice president of Bell Tower Green, was explaining one of the reasons why the organization wanted to put lights on the tower in the first place.

“We have always, from the beginning, wanted to have the options to celebrate with the rest of the world, whether it’s national holidays or days of mourning or special occasions,” Walser said. “Much like how the Eiffel Tower and Empire State Building can be lit up.”

Even though the Bell Tower will have the capability to be transformed into almost any color, that doesn’t mean it’ll be given a new shade very often.

“It’s not like we’re going to be flashing all these multicolored lights frequently, which would be a distraction,” said Dyke Messinger, the president of Bell Tower Green. “It’s only for special occasions.”

The lights on the Bell Tower were designed to comply with the Historic District Design Guidelines, which are enforced by the city’s Historic Preservation Commission. The Bell Tower Green’s designs for the park, including the lights, were approved by the HPC over a year ago.

In the end, it will be up to the city of Salisbury to decide when to use the Bell Tower’s new lights, since the park will eventually be deeded to the city, Messinger said.

“If the city decides not to choose colored lights, that’s their decision,” Messinger said. “When we were doing this, we thought it might be desirable for special occasions.”

The Bell Tower may not be lit up again for a while, since the energy source that was used to test the lights was only temporary and construction is still underway. But the lights will work in conjunction with the water wall’s lights, once work is completed.

Messinger is toying with the idea of flipping the switch for one of Salisbury’s biggest celebrations of the year.

“You know, we ring in the new year, we have for years, at the Bell Tower,” Messinger said. “Even though the park might not be 100% complete, we’re hoping to do that. It’s possible that we might, or the city might, want to give a different light to the top of the Bell Tower.”

A New Year’s Eve celebration has been held at the Bell Tower for years, but was moved to the F&M Trolley Barn in 2020 since the park was under construction. But this year, the celebration could return to its original location. And this time, there might be lights.