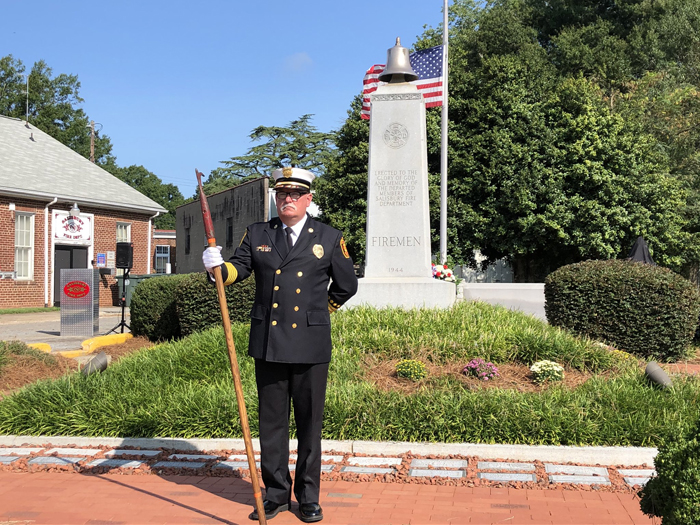 SALISBURY — The sentiments were the same at the Sept. 11 remembrance service, but there was a different feel this year with only a few participants at the site of the city’s firefighter memorial since it was an online event.

“It means a great deal to us to never forget the sacrifices made by many on Sept. 11, 2001. And at the same time it was incumbent upon us to provide a safe environment for the participants as well as those from the general public that usually attend the memorial service,” Fire Division Chief Jay Baker said.

The service began at 8:45 a.m. to commemorate the time an American Airlines Boeing 767 crashed into the north tower of the World Trade Center, instantly killing hundreds and trapping hundreds more.

It’s been 19 years since the al-Qaeda Islamic terrorist group hijacked four airplanes in coordinated attacks against the United States. Two of those four planes were flown into the twin towers of the World Trade Center in New York, a third plane crashed in a field in Shanksville, Pennsylvania, and a fourth plane struck the Pentagon just outside of Washington, D.C.

The Salisbury Fire Department again hosted the remembrance ceremony at the Salisbury-Rowan Firefighters’ Memorial just outside of station No. 5.

Salisbury Fire Chief Bob Parnell greeted those who were watching and the few participants gathered.

It was an opportunity to “honor the sacrifices and the bravery demonstrated on Sept. 11, 2001,” Parnell said.

He noted the resolve it took the federal government to bring the person responsible to justice. Osama bin Laden, founder and leader of the terrorist group, was killed in 2011.

It’s the same resolve, bravery, courage and fortitude he sees in the local firefighters, Parnell said.

He spoke of the 60 police officers and the 343 firefighters who were killed rescuing others and the nearly 3,000 citizens who died.

“What a sacrifice,” Parnell said.

“Locally, when that happened, even Salisbury stopped,” he said.

Parnell recalled on the day of the attacks how people stopped by to talk with firefighters and to show their appreciation.

Current Mayor Karen Alexander spoke about paying tribute to those members of the community who have given their lives.

“We also take this opportunity to thank our own first responders, firemen and women, and all of our police officers who daily run into danger to protect us as community members,” she said.

She noted how the country, cities and counties across the nation came together to “support those who protect us every day and it helped us remember and recognize all of these everyday heroes,” Alexander said.

During the service, Parnell read the timeline of Sept. 11, 2001, including when the hijacked airplanes struck the towers and crashed into both the Pentagon and in a Pennsylvania field as well as the dispatch of emergency responders to those areas.