SALISBURY — A Salisbury man found hiding at his mother’s home was charged with failing to register as a sex offender. 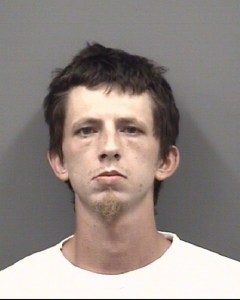 The Rowan County Sheriff’s Office charged Jimmy Wayne Foushee, 29, of the 1900 block of North U.S. 29, with felony failure to register as a sex offender and misdemeanor resist, obstruct, delay an officer.

His mother, Frances Diane Foushee, 56, also the 1900 block of North U.S. 29, was issued a misdemeanor citation for resist, obstruct, delay an officer for hiding him at her home, Sheriff’s Capt. John Sifford said.

Davidson County officials notified Rowan officials on Wednesday they had information that Foushee had not registered and provided an address where he might be located. Rowan deputies determined from neighbors that Foushee was at his mother’s house.

As Rowan deputies approached the home, a man who matched Foushee’s description immediately slammed the door. Officers knocked and were met by Frances Foushee, who told them her son was not there.

“She said he was there earlier but was not there now,” Sifford said.

Officers searched the home and found Foushee hiding in a wardrobe in the living room. He was arrested and remains in the Rowan County Detention Center under a $12,500 secured bond.

• A man reported on Wednesday he was the victim of fraud while in the 3900 block of Bringle Ferry Road.

• A man reported on Wednesday someone broke into his property in the 21200 block of Old Beatty Ford Road, Gold Hill.

• Ontario Inc. reported on Wednesday the business was the victim of larceny in the 500 block of Kesler Road, Cleveland.

• Johnathan Taylor Douglas, 21, was charged on Wednesday at the Rowan County Magistrate’s Office with misdemeanor assault on a female.

• Jeffrey Lynn Kee, 40, was charged on Wednesday with misdemeanor possession of drug paraphernalia while in the 500 block of West Kirk Street, China Grove.

• Hayden Norris House, 29, was charged on Wednesday with felony possession with intent to manufacture, sell or deliver a controlled substance schedule VI while at the Rowan County Magistrate’s Office.

• A woman reported on Thursday she was the victim of a burglary that occurred sometime between July 1 and Monday in the 400 block of Gold Hill Drive.

• A woman reported on Thursday someone stole items from her vehicle parked in the 900 block of East Lafayette and Cedar streets.

• A man reported on Thursday someone stole a bicycle from the 500 block of West Jake Alexander Boulevard.

• Anthony Laquane Brooks, 29, was charged on Thursday with felony possession of a firearm by a felon while in the 1000 block of West Fisher and Lloyd streets.