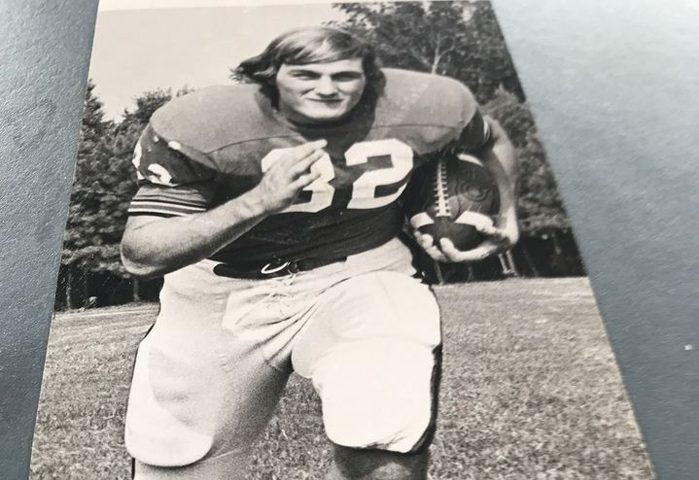 We were never friends, but we were occasional enemies in basketball gyms, particularly one memorable winter in an over-30 halfcourt league in Concord’s Logan Center in the 1980s.

His elbows could drill holes in your chest and he could do it with a smile. He was a fiercely competitive guy, very tough and crazy strong, even then, more than a dozen years removed from his days of running the football for South Rowan.

I didn’t see Steve for many years after our 1980s encounters, but then our paths crossed again after Brent emerged as a star athlete at West, leading the basketball team in scoring and kicking and punting well enough to sign a football scholarship with Mars Hill. Steve frequently called the Post to check on Brent’s punting average.

Steve didn’t get to play on winning football teams at South Rowan, but looking back on it, I believe he is one of the guys who helped coach Reid Bradshaw and the Raiders turn the corner.

From his photos, he already was a grown man in high school. That was an era in which hard work on farms and in mills made kids strong, rather than lifting weights. He was a fullback who wore the “32” jersey and he defined rugged. He weighed 205 pounds as a senior, with thick, powerful legs.

He actually was quite a bit bigger than the majority of South’s linemen in the fall of 1973,  days of Afros and days of long hair cascading over collars and spilling down to eyebrows.

South would go 2-8 his senior year. Patterson rushed 116 times for 499 yards, 4.3 yards per carry. I imagine that all of those yards were between the tackles and I’m sure none of them were easy.

South had taken a pretty harsh licking in the South Piedmont Conference from 1970-72 and had won a grand total of two league games in three seasons.

In 1973, the Raiders shifted to the North Piedmont Conference for the first time, a solid league, but a league in which they had a much more realistic chance to compete.

South won its second outing that season, crushing South Iredell, 30-6. Believe it or not, that was only the second time in 13 football seasons that South had reached the 30-point plateau. Patterson scored one of the touchdowns.

Patterson and halfback Jim Willett were becoming a promising inside/outside combination, but South lost the next week to Mooresville, 20-7. Patterson had 11 carries for 72 yards and scored the South touchdown.

Patterson had 15 carries for 67 yards against East Rowan, a game in which South held the lead with under three minutes left.

But October brought nothing but setbacks. South wouldn’t get its second win that season until early November. That was an exciting 27-20 victory over North Iredell. Willett broke the decisive TD run late in that one. Patterson contributed nine carries for 51 yards.

Patterson finished in the top 10 in the county in rushing.

He showed enough ability and potential that he signed a scholarship with Lees-McRae, a junior college in those days.

He never stopped being a South Rowan fan, and he did his part to change the program’s fortunes.

Early in the 1975 season, South won the pivotal game against a good East Rowan team that Bradshaw has called the key night in his Hall of Fame coaching career and in the turnaround of the program. South went 8-3 in 1975 and kept right on winning throughout the 1970s and 1980s.

Patterson spent his working life as the owner of Statewide Collection Services, retiring in 2017.

Those left to cherish his memory include Brent and Mallory, as well as his daughter, Brenna Hill and husband, Mark.

He had two granddaughters. He also is survived by a sister, Crystal Patterson.

Services were held on Sunday.

ACC coaches back idea of all D-I basketball teams…