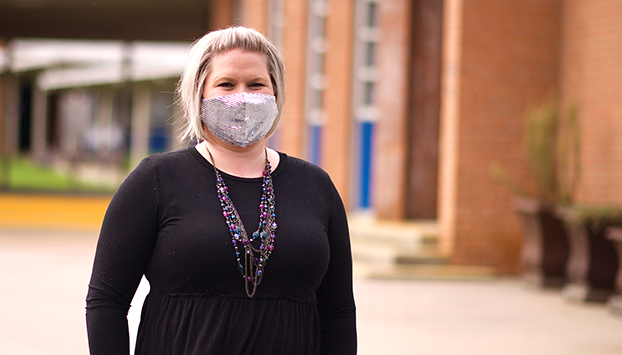 Carl Blankenship/Salisbury Post – Rowan-Salisbury Schools Teacher of the Year Sally Schultz standing in front of Knox Middle School after her win was announced on Wednesday afternoon. Schultz is passionate about working in Title I schools.

SALISBURY — Sally Schultz says her favorite thing about being a teacher is just being with her students.

It’s not all about academics, either. Just sitting, talking and laughing during is a key experience that makes being a teacher seem a little less like work.

“It’s just those relationships with the kids that’s the best part,” Schultz said.

And that relationship-building skill is just part of what led Rowan-Salisbury Schools to name Schultz, a Knox Middle School teacher, the district’s teacher of the year on Wednesday. The award comes with a new Kia sedan for Schultz to use for the next year courtesy of Gerry Wood Auto Group. Superintendent Lynn Moody gave Schultz an enthusiastic introduction before asking if she could ride in the car.

“I’m just thankful for a district that likes to be innovative,” Schultz said during the event.

But being named teacher of the year is about much more than the car. Schultz — a sixth and seventh grade math, science and English teacher — got much-deserved recognition for her teaching talents.

“I feel like it’s rewarding for the amount of time and effort I put in every single day,” Schultz said, adding she was especially honored because it is a challenging time for educators due to COVID-19. 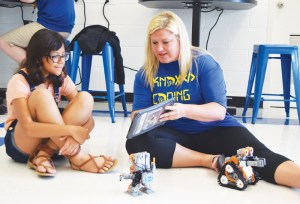 Schultz earned a bachelor’s degree in education from Catawba College and an AIG certificate from the University of North Carolina at Charlotte. Now, she is working on a master’s degree through Western Governor’s University.

She started her teaching career at Hanford Dole Elementary School teaching kindergarten, and she loved it. But Michael Courtwright, the principal at Hanford Dole at the time, asked her to teach fifth grade instead. Initially, she was terrified of the prospect of teaching the “big kids,” but it turned out she loved that, too.

When Courtwright moved to Knox, Schultz followed him. She said she likes Courtwright’s leadership style and feels he pushes her to be a better teacher every day.

Courtwright described Schultz as a pioneer and a leader at the school. Courtwright said she works hard to meet her students needs socially, emotionally and academically as well as help them develop their dreams and aspirations.

“She just has that gift,” Courtwright said.

That gift has been highlighted before. At Hanford-Dole, she was named the school’s teacher of the year.

“There ain’t no one who works as hard as Ms. Schultz,” Courtwright said. “There’s some that might say they care as much about kids as she does, but in reality there are very few who care about the kids like Ms. Schultz does. She really lays it on the line every day that she comes to school.”

The district teacher of the year is chosen from the pool of individual schools’ teachers of the year. The panel that judged this year’s winners was made up of community education stakeholders from Rowan-Cabarrus Community College, Rowan Museum, Service Above Self, N.C. Transportation Museum, Livingstone College the RSS Board of Education as well as 2019 Teacher of the Year Theresa Price and RSS retiree Kathy Sanborn. Her parents, Terry and Sue, were brought into the virtual announcement on Wednesday call to congratulate Schultz as well. The chat was also full of colleagues congratulating Schultz. 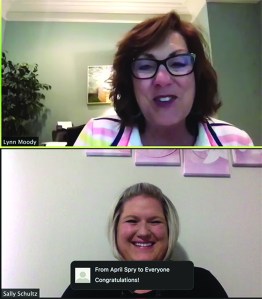 RSS Superintendent Lynn Moody congratulating Sally Schultz on being named the district’s Teacher of the Year. Granite Quarry Elementary School Principal April Spry chimed in with congratulations in the chat as well.

Schultz said she is not sure what she will be doing in the next few years, but she wants to keep working in Title I schools such as Knox. Title I schools serve at least 40% low-income students.

Schultz said she feels Title I schools sometimes get a bad reputation because people may not see the capabilities of the students, and she wants to help people see the kids are amazing across the board.

Shultz says she is passionate about equity and has helped with after-school and Saturday school programs as well as girls mentoring groups. She wants her students to be just as competitive as everyone else.

“It was what made me love school,” Schultz said. “From there, I knew I wanted to be a teacher and wanted to make sure I was reaching every single kid in my classroom like she did for us.”

When she is not busy at school, Schultz likes to spend time with friends and family, her dogs and travels to New York to visit family often.