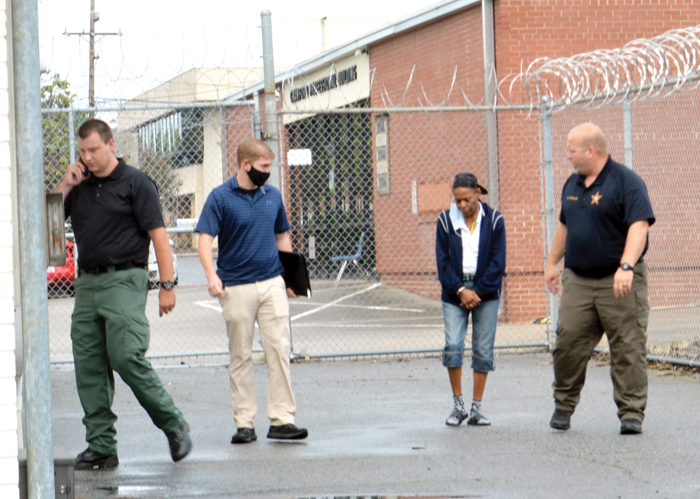 SBI Agents and local investigators escort Elizabeth Raye Freeman to the county jail. She was arrested Wednesday for her involvement in the 2019 murder of Timothy Austin Hall. Shavonne Potts/Salisbury Post

LANDIS — A Charlotte woman was charged Wednesday in the murder of Timothy Austin Hall, who was shot and killed at a residence on Town Street more than a year ago.

Investigators with the Landis Police Department and the State Bureau of Investigation charged Elizabeth Raye Freeman, 60, with one count of murder for her involvement in the shooting death of Hall. Freeman is currently being held in the Rowan County Detention. According to a statement from Landis police, her bond will be set by the court at a later date.

Police said officers responded on Aug. 16, 2019 to the reported shooting at 314 Town St., Landis. Upon arrival, officers found Hall, 51, of Landis, dead from an apparent gunshot wound. Investigators have not provided details as to the connection between Freeman and Hall.

A neighbor called 911 and the residence where Hall was killed was that of his girlfriend.

Landis investigator Shane Safrit said at the time that the shooting was not likely the result of a domestic disturbance. He said investigators think the motive may have been robbery.

Safrit said on Wednesday the investigation is ongoing and that no additional information can be released at this time.

Investigators brought Freeman in handcuffs to the Rowan County Magistrate’s Office, where she was served with an arrest warrant.

Anyone with information regarding this incident is asked to contact Safrit at the Landis Police Department.

Anonymous tips may be submitted via Crime Stoppers by calling 1-866-639-5245 or submitted online at tips.salisburyrowancrimestoppers.org.