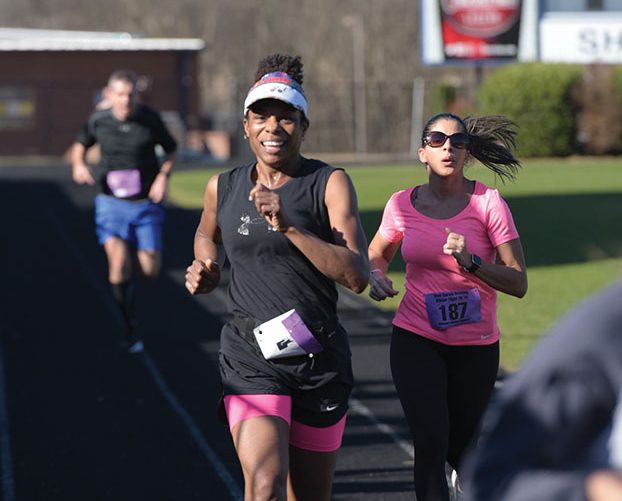 Dr. Acquawon Stallworth, Gilcelia Torres and Markus Gebe ran across the finish line at the Winter Flight race in January, one of the Salisbury Rowan Runners' largest events. Due to COVID-19, it was also one of the few races that happened this year. Aaron Cress Photography.

SALISBURY — When David Freeze hosted the Will Run for Food 5K in late February, he didn’t know that it would be the last race he’d host for months.

At the time, the calendar before him was ripe with upcoming races. As president of Salisbury Rowan Runners, Freeze is responsible for coordinating and overseeing most of the races that happen in Rowan County. Each year, Salisbury Rowan Runners typically helps host 25 to 35 races. This year was scheduled to be no different — then COVID-19 shut the running season down.

“It’s been like no other year I’ve ever experienced,” Freeze said. “This has been a bad year for racing.”

Not having races hasn’t been just a bummer for runners who enjoy lacing up their shoes on Saturday mornings. Almost every 5K, 8K or fun run that happens helps raise money for a local charitable organization. When almost no races were run from March until now, these organizations lost out on much-needed revenue that helps keep them operating.

In a normal year, thousands of dollars are raised for local charities through various running events, Freeze said. He estimated that most races raise between $3,000-5,000 and that some top out at over $10,000. That’s money that organizations rely on to support their daily operations, fund mission trips and finance special events. It’s also money that most of them won’t receive this year.

“This year, everything slammed to a halt on the first of March. Instead of having three or four events a month of some kind, we had none,” Freeze said. “It is so hard. All these charities are suffering and aren’t getting money from other people.”

The Salisbury Rowan Runners’ premiere race, called the Winter Flight, was one of a handful of races that went on as scheduled in January and February, before COVID-19 brought runners to a halt. Winter Flight raised $13,300 for Rowan Helping Ministries, one of the largest beneficiaries of running events in Rowan County. Kyna Grubb, the organization’s executive director, said she is thankful their flagship race managed to go on without a hitch.

“It makes a big impact on our budget so it was great that they were able to do it,” Grubb said.

“We’re down 30-50% on funding for the American Cancer Society,” said Jennifer Ashley, a team member and committee person for Rowan County Relay for Life. “That’s huge. And we’re not the only non-profit that’s hurting. If you can’t have events, you can’t raise money.”

The organization’s main event, the Relay for Life, was canceled earlier this year. Besides losing out on that revenue, the organization also lost out on any money that would’ve been raised with the Bare Bones 5K.

“That’s a big fundraiser all on its own,” Ashley said. “We’re going to be hurting without that one.”

In the absence of raising money for nonprofits while racing each other on Saturday mornings, members of the running club decided to donate their time instead. When Helping Ministries needed volunteers to serve extra shifts serving food at Jeannie’s Soup Kitchen, Freeze circled the wagons.

“Since they weren’t busy on Saturdays and are all about giving back so they’re going to take care of our community one way or another,” Grubb said. “They really did step up and made volunteering in our kitchen fun for their group but also fun for us.”

Freeze said he is hopeful the club will be able to finish out 2020 with several races. A high-school-runners-only event was hosted at Patterson Farm, and Freeze thinks it could be the first of a reduced, but resumed, running season.

“We still hope to get about four more races this year,” Freeze said. “We still think we still have time to do some of those big ones.”

The Ed Dupree 5K, Butterball 5K and Santa 5K Run are some of the upcoming races that Freeze thinks could still happen. The future of several races is at the mercy of whether Gov. Roy Cooper will move the state into phase three of his coronavirus executive order or stay at phase 2.5. When the state was in phase two, the city of Salisbury was not issuing permits for races within the city’s limits.

“In Salisbury, we have to have a permit to have a race and permitting is not in effect right now until the governor goes to phase three. So we’re just kind of locked up,” Freeze said.

Freeze may look to move some races outside of Salisbury — to smaller parks in Rowan County.

When racing does continue, it will likely look different than it has in the past. Many races will most likely mimic the strategies implemented by the Shiloh Missions 5K, the only race that was run after February. Hosted on the last Saturday in June, the race featured different protocols than in years past.

“We just had to be a little bit more careful with how we did our race,” said Luann Fesperman, the race’s coordinator. “We had two starts. We started both of them at the same time but we started at two different locations. The women had their location and the men started at their location and then they funneled together. Once the race starts, everyone is pretty spread out anyway.”

The race raised money for youth from the Shiloh Reformed Church of Faith to complete mission work. Fesperman, a member of the church, is thankful that the race secured many of its sponsors long beforehand.

Entry fees and donations help raise money, but it’s typically sponsorships from local businesses that are a 5K’s biggest revenue-generator.

Freeze said that he is concerned that sponsorship money for upcoming races won’t be as readily available.

Even though last year’s Winter Flight raised over $13,000 for Helping Ministries, hitting that mark again might prove difficult.

“I’ve already heard from some of the folks who are usually our major sponsors to expect less or maybe not at all this time,” Freeze said. “We’re going to have to have a real belt-tightening going into that race to make it as good as it usually is without maybe not as big of a payout to Rowan Helping Ministries.”

Although races might not raise as much money as they have before, Freeze said that he is ready to get back to having some version of normalcy.

“We’re looking so much to get back to normal,” Freeze said. “We’re hoping we can salvage some of our better races before the year is over.”