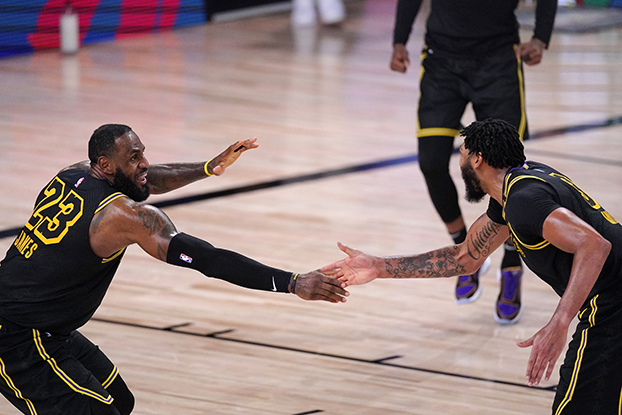 LAKE BUENA VISTA, Fla. (AP) — The Los Angeles Lakers were on a wild ride at Disney.

A huge lead in the first half had turned into a two-point deficit after three quarters. If they didn’t turn things around, the No. 1 seeds would be down 2-0, though Anthony Davis said they weren’t thinking about that.

Having LeBron James take over usually does the trick.

James had 28 points, 11 rebounds and nine assists, Davis added 34 points and 10 rebounds and the Lakers evened the Western Conference semifinals by beating the Houston Rockets 117-109 on Sunday night.

Markieff Morris scored 16 points for the Lakers. They opened a 21-point lead in the first half, gave up 41 points in the third quarter to fall behind, and then regrouped behind some high-flying plays by James to pull away again.

James took only 15 shots in Game 1 and was scoreless in the fourth quarter of the Lakers’ 112-97 loss, saying afterward that the Lakers needed to experience a game to understand how fast the small-ball Rockets play.

And when the Rockets adjusted from the first half to the second, James was dominant on both ends in the final period. He had eight points in the quarter and a powerful blocked shot on Russell Westbrook that flew far out of bounds.

James Harden scored 27 points and Eric Gordon made six 3-pointers and added 24 for the Rockets, who made 22 3-pointers. P.J. Tucker had 18 points and Robert Covington 17, but Westbrook finished only 4 for 15 while scoring 10 points and grabbing 13 rebounds.

“They just came out and played harder than us, I feel like,” Harden said. “In the second half, we woke up and took the lead. We’ve just got to have that intensity at the beginning of the game and we’ll be all right.”

The Lakers also dropped their opener against Portland in the first round but won Game 2 comfortably on their way to four straight victories.
This one appeared it would be easy, then appeared it might not come at all.

But James had a dunk to open the fourth and tie the game and another dunk on a lob during an 8-0 run that gave them the lead for good. They put it away later in the period with a 9-0 burst, featuring two baskets from Davis, to make it 113-101.

Morris sparked a big finish to the first quarter. He had a 3-pointer with 1:11 left, then connected again at 52 seconds and a third time with 31 seconds left, pushing the lead to 33-17. Rajon Rondo made one more at the buzzer to give the Lakers a 36-20 cushion.

“Middle of the first all the way to end of the first, they just hit us in the mouth,” Houston coach Mike D’Antoni said. “We didn’t play with enough intensity to match their fire. We adjusted in the second half in the sense that we played harder.”

James scored six quick points in the second to make it 42-21. Houston had a good stretch to cut it to nine with just under 5 minutes remaining in the half, but the Lakers quickly ran off 10 straight to push the lead back to 61-42, and it was 67-51 at the break.

Gordon made two straight 3s and Tucker hit one to open the third, forcing the Lakers to call a quick timeout and take center JaVale McGee out so they would match up better. But that didn’t slow the Rockets at all, with Gordon getting a layup and Harden another 3 for a 14-0 start that made it 67-65.

Houston then reeled off 10 in a row later in the period, with Covington converting a four-point play followed by a 3-pointer to start it and give the Rockets the lead. They were up 92-90 going to the fourth.

TIP-INS
Rockets: Houston is 7-1 in series under D’Antoni when it won Game 1. The lone loss was to San Antonio in the 2017 Western Conference semifinals. … Danuel House Jr. scored 13 points.

Lakers: The Lakers outscored the Rockets by 28 points when Rondo was in the game. “He has such an impact,” Vogel said. “His impact on our team is measured in swag.” … James moved past Ray Allen (385) for second on the career postseason list for 3-pointers. Stephen Curry is the leader with 470.

NOT THAT UNUSUAL
Despite the focus on the Rockets’ style, D’Antoni said the Rockets aren’t that different than other NBA teams. “I just watched Miami for example. (Bam) Adebayo’s the only guy they got bigger than us and I don’t know, what two inches bigger? He’s about 6-8 or 6-9, I don’t think 7-feet or 7-2,” D’Antoni said. “So it’s like, I’m watching, I go, ‘Why don’t they say that’s small ball?’ Because that’s what it is.”

DOC IN THE HOUSE
Clippers coach Doc Rivers was sitting in the seats to watch family and potentially foe. His son, Austin, plays for the Rockets. The Clippers would play the winner of this series if they beat Denver in the other West semifinal.