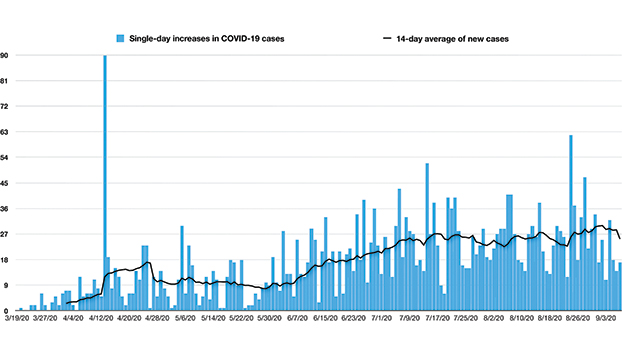 This chart shows the progression of COVID-19 positives in Rowan County, with the blue bars showing single-day increases and the black line showing the 14-day average of new cases.

SALISBURY — The number of COVID-19 cases in Rowan County increased by 49 over the Labor Day holiday to reach a total of 2,931 total positives.

Because there were no recoveries added on Saturday, Sunday or Monday, the number of active cases rose, too, and stood at 427 on Monday.

Individual day increases in positives were:

Hispanic Rowan County residents continue to be disproportionately affected by the COVID-19 outbreak, representing 9.4% of the population but more than 30% of the positive cases.

Across the state, there have been 177,919 positives after 2.46 million tests. An estimated 156,652 people are presumed to be recovered, according to state data released Monday. There are 2,897 COVID-19 deaths in the state and at least 765 hospitalized.

The number of people hospitalized, though, may exclude some hospital systems, according to a news release issued Monday. Since Friday, there have been technical and submission issues with hospital systems’ data, the N.C. Department of Health and Human Services said.

“Because the COVID-19 NC Dashboard displays only data that it is received, it is likely that actual hospital numbers are higher than what is on the current dashboard,” the department said.

Political Notebook: Rowan Board of Elections sends out thousands…