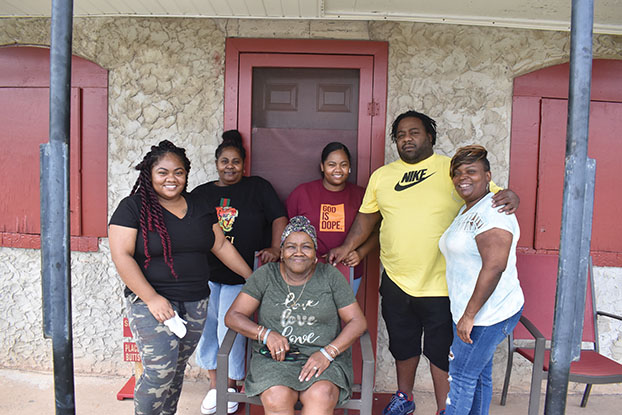 Raquel Hammond, Kristin Hammond, Jelissa Hammond, Debra Pearson, Tyre Hammond and Clara Belk are one big family. Tyre is the man behind the restaurant, but his mother, wife, sister and nieces are the ones behind the cooking. Ben Stansell/Salisbury Post

EAST SPENCER — It’s a small unassuming building across from a vacant, partially burned down former school.

That’s why he decided to lease the building from its longtime owner and restore it back to its former glory.

In 1946, a cafe was opened on South Long Street by John Hedrick Krider and Edna Emerson Krider. It eventually closed before being revived by their son John Krider in 1954. From then on, Krider’s Cafe became a fixture in the East Spencer community, famous among schoolchildren who stopped by for a burger or hot dog once classes let out for the day at the Dunbar School, or, decades later, North Rowan Middle School. Hammond was one of those kids.

“I grew up in East Spencer,” Hammond said. “I grew up eating this food. I went to school right across the street. Everyday it was open, we ate it.”

Hammond, who began leasing the building from John Krider’s son, John E. Krider III in January, is looking to once again position the restaurant as a focal point in the community. Except this time, it’ll be called Hamm’s Cafe and it’ll serve up more than just burgers and hot dogs.

The restaurant was last in operation as Krider’s Cafe about seven years ago. Since then, it’s been sitting vacant. Hammond didn’t like watching the restaurant where he used to hang out go to waste.

“It’s been closed down for seven years. It’s a sore sight for your eyes for it to just be sitting here and ain’t nobody doing anything with it,” Hammond said. “It has a lot of history to do with East Spencer. I thought ‘Why don’t I open it back?’ It’ll give the city a little bit more life.”

The building deteriorated in the time that it sat untended. Once Hammond took over, he completely gutted the inside, replacing everything from the toilets to the fryers.

“We remodeled it. Everything in here is brand new,” Hammond said. “New fryers, new coolers, new cabinets, new soda machine. We redid the bathroom. We did a lot of work.” 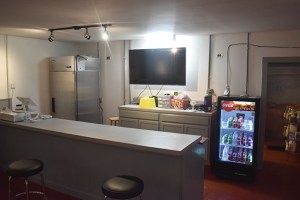 Tyre Hammond had to gut and replace almost the entire interior of the building. Now, the restaurant has new appliances, tables, a TV and more. Ben Stansell/Salisbury Post

East Spencer Mayor Barbara Mallett moved to the town after she’d finished school. But she got to be around for the restaurant’s glory days, when it was one of the few, if not only, restaurants owned by an African American in the area.

When Krider’s stopped serving meals, the community lost one of the few remaining food sources in the vicinity. The area, which Mallett called a “food desert,” is largely void of restaurants and grocery stores. That’s one of the reasons why Hammond was so compelled to breathe new life into the old building.

“From the town of East Spencer on up, there’s nothing to eat,” Hammond said. “Now they don’t have to go on up the street. They can come eat here. They aint got to go too far.”

For Mallett, watching a new version of the community’s oldest culinary institution open up is a sign of change.

“I see this as a coming home of our young people who see potential in our town of East Spencer,” Mallett said. “I’m hoping it becomes a neighborhood hub for everybody. Not everybody can come at one time, but I hope people can come and enjoy the atmosphere and talk and be a community.”

Even though the restaurant is now Hammond’s instead of Krider’s, the bridge to its past isn’t gone. John E. Krider III made his long awaited return to the kitchen for Saturday’s grand opening to serve his chili and slaw for new and old customers.

In addition to the hamburgers and hot dogs, Hammond is expanding the menu to include shrimp and grits, fried fish and other southern foods. The restaurant will offer fried chicken and other soul food staples on Sunday for the after-church crowd.