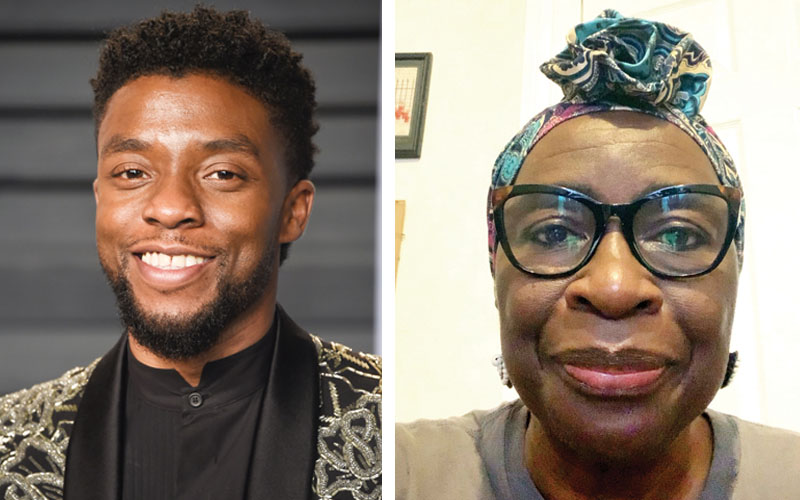 SALISBURY — In 2002, local thespian and director Linda Hunt had an opportunity to work as an assistant director to a young man who went by the name Chad in her home city of Pittsburgh.

The young director, Chadwick Boseman, would go on to star in “Black Panther,” one of the top-grossing superhero films of all time. About a week ago, she, like much of the world, learned that a young man with boundless potential died from colon cancer.

In 2018, Hunt, a former Livingstone College theater professor, was recognized as the first African-American woman to direct a play on a commercial stage in Salisbury for AlieNation at Lee Street theatre, but recalled her experience working with a young Boseman.

Boseman had only graduated from Howard University a few years prior. And Hunt’s mentor, Vernell Lillie, the founder of Kuntu Repertory Theater in Pittsburgh, invited Boseman to direct a play he’d written called “Hieroglyphic Graffiti.” Hunt was working on her master’s degree at the time and needed some credits. So, she signed on to assist Boseman.

“I was, of course, shocked because I hadn’t heard,” Hunt said.

After seeing the post, Hunt was immediately taken back to that time that they worked together in the play.

“Every time I would see something with Chad in it, my mind would always go back to that time in 2002 when he came to Pittsburgh,” she said.

Hunt recalled their first meeting, when she walked into the room and Boseman looked up and said, “Oh who is this beautiful Black woman.” While she needed the credits, Hunt said his smile sealed her interest in working for him.

An assistant director’s job most of the time might involve coffee runs, making copies or sweeping the stage. She marveled at the fact that Boseman appreciated her input and that of the actors in the play.

She said it was obvious that the young Boseman was well-trained and knew his play well.

In 2002, Hunt didn’t know Boseman was an actor, “but I knew there was brilliance about him and how he attacked his work and the integrity that he put into the stage and aesthetics that he was determined to have in his performers.”

In addition to his role as the star of “Black Panther,” Boseman, also portrayed baseball player Jackie Robinson in “42,” singer James Brown in “Get on Up,” and Supreme Court Justice Thurgood Marshall in “Marshall.” She believes his legacy to the acting world is portraying characters with integrity.

“I think we can tell our stories with integrity and that it can cross over to other people of other races in a way that they have to value it,” Hunt said. “They might not always understand the nuances that we do because they don’t have the experience of being Black in America or coming from the continent but they can at least respect the beauty of it and it was something he demanded on stage.”

She always thought she’d get the opportunity to work him again. But was sad to know that she’ll never get the chance.

“I feel the loss. I feel the empty space, but look how much he accomplished in such a short time,” she said.

Exercising your options: Getting a good workout even if…