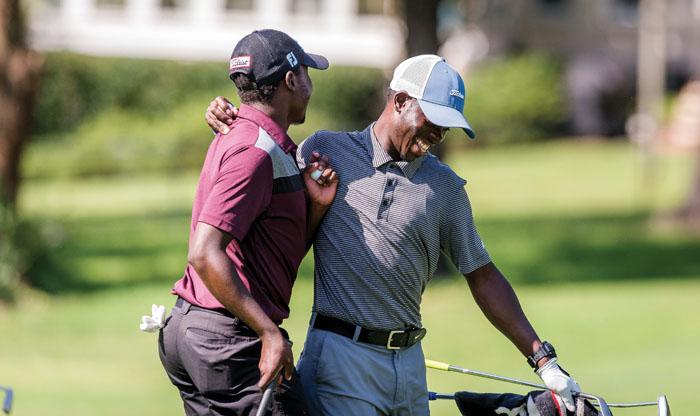 Joel Basalaine, left, and Ronald Otile compete during the first round matches in the Championship Flight of the Labor Day Golf Tournament at Salisbury Country Club. Photo Credit: Sean Meyers

SALISBURY — Nick Lyerly’s 20-foot downhill putt on the 18th seemed to roll for an hour, but it found the cup, it staved off defeat, and an incredible first-round match headed for extra holes.

More Lyerly heroics were needed for that decision to be reached. He chipped in for a birdie to decide the epic struggle in the Championship Flight.

Neither duo ever led by more than 1-up on the course at the Country Club of Salisbury.

Lyerly made another chip-in on No. 13, this one for an eagle, to get his team even heading down the homestretch.

“It was one of the most exciting matches I’ve ever played in,” Lyerly said. “Especially on the 18th when that putt dropped in. When I hit it, I thought it was short, Eric thought it was short, and everyone else who was watching thought I’d left it short. That ball was trickling. It was moving in slow motion. On the very last revolution, it fell in the hole, and Eric and I went crazy.”

It was a tough loss for Adjidra and Jakisa, who hail from Uganda, but they impressed their opponents.

“They’re really good players and they were great guys to play against,” Lyerly said. “I know how heartbreaking it is to lose a match like that, when you’re so close to winning it. Believe me, I’ve been on the other side of that. They were great sports.”

Lyerly is normally playing golf at UNC Greensboro at this time of year, but with the Spartans shut down, he’s excited about being back in the Labor Day event for the first time since his high school days at East Rowan.

Lyerly and Mulkey will take on the sixth-seeded team of Derek Lipe/William Little in a quarterfinal today. Lipe and Little handled the 11th-seeded team of former Salisbury High stars Clark Alcorn and Alex Nianouris, 3 and 2.

The other Livingstone team that qualified for the Championship Flight did advance, as the fifth-seeded Ugandan pairing of Joel Basalaine/Ronald Otile, prevailed against No. 12 Steve Chatt/Jack Chatt, 4 and 3.

The fourth-seeded team of Lee Frick/Blake Wray won 2 and 1 against Seth Waller/Russ Adams. Frick and Wray were Labor Day champs in 2017 and 2018. They’ll take on Basalaine/Otile today.

The top-seeded team of Kevin Lentz/John Dyer, which shot a scintillating 62 to pace qualifying, cruised 5 and 4 against 16th seeded Wally Eidson/Kyle Venrick.

Catawba’s Tanner Bibey, half of the winning team in 2019, is playing with a new partner. He and A.J. Boyd are seeded eighth and won against No. 9 Chris  Bowers/Todd Pegram, 4 and 3. Bibey/Boyd will provide the second-round opposition for Lentz/Dyer.

Also winning Saturday was the second-seeded team of Corey Basinger/Doug McDonald. They shot a blistering 63 in qualifying and won a tough first-round match with 15th-seeded veterans Ryan Honeycutt/Keith Dorsett, 1-up.

They’ll take on seventh-seeded Jake Clodfelter/Hank Robins today. That team got past 10th-seeded Josh Brincefield/Charlie Barr, 3 and 2. Clodfelter is a Catawba freshman from Wheatmore High, while Robins starred at Salisbury High.

In all, 120 two-man teams played on Saturday. Eighteen matches came down to the 18th hole, while five went to extra holes.