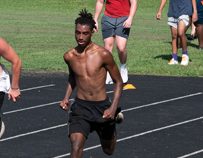 MOUNT ULLA — Footballs were kicked off in Florida, Georgia, Mississippi, Kansas and New Hampshire on Friday, raising the number of states that have started their 2020 high school football seasons to 23.

Many of those games are being played with limited stadium capacity, with fans wearing masks and being reminded often by public address announcers to practice social distancing.

Players spread out on the sidelines, rather than huddling together.

There are no postgame handshakes, but still the games themselves continue basically unchanged.

Kentucky and Pennsylvania plan to join the action this week. Eight more states are scheduled to start later in September or in October.

There’s still uncertainty as far as the smartest way to proceed in the year of a pandemic. Michigan announced a move of football to the spring, and then ran a reverse and set a Sept. 17 start date.

North Carolina is one of 17 states, plus the District of Columbia, that postponed football to the winter/spring months in 2021. The first official practice is set for Feb. 8, while the first match-ups in a seven-game regular season will be played on Feb. 26. The regular season will end April 9.

Administrators try to figure out how to cope without football revenue. Fans and parents try to fill the gaping void in their lives. Coaches, players, cheerleaders and band members who have always counted on football games as a focal point of their lives at this time of year are facing new challenges and unexpected down time.

He got an offer from Georgia Tech in January, had a chance to visit the Atlanta campus right before COVID-19 shut down such trips and committed to the Yellow Jackets in May.

Biggers expected to be three games into his senior football season at this point, and he probably would have five sacks and 10 tackles for loss in the books if he was. He figured to be competing for county player of the year honors in football, and then playing basketball, a sport he really enjoys and a sport in which he is a big factor for the Falcons.

But football in North Carolina public schools is months away, and it will be a condensed season when it finally arrives, so the elite seniors like Biggers have choices to make. Does he stick around for his senior football season or does he graduate early and get his academic and athletic career at Georgia Tech under way?

“I’ve kind of been going back and forth with it,” Biggers said. “It’s a tough decision. I’ve been debating what to do. Basketball is definitely part of the decision.”

For new West Rowan head football coach Louis Kraft, his dream job has come with unexpected obstacles before he ever coaches the Falcons in a game. He’s looking out for Biggers. The goal is to make sure the big guy is in the best shape of his life, whether he’s at West Rowan for the spring semester or at Georgia Tech.

“Zeek moves so well, it’s easy to take him for granted and forget how large a man he is,” Kraft said. “There’s a lot of quick-twitch stuff going on there for someone that size.  Zeek is different. He’s definitely different. He opens eyes every day with the things he can do.”

Biggers played well for a local AAU basketball squad (Team F.L.Y.) that won a championship this summer, so he hasn’t been sitting on the couch. He’s been working to stay fit.

Even when the Falcons were holding workouts in pods in June and July, Kraft figured the eventual N.C. High School Athletic Association timetable was going to involve a winter/spring season.

“As coaches we had a hunch we probably couldn’t play in the fall and I think the players were kind of anticipating a move to the spring, as well,” Kraft said. “When we got the official word from the NCHSAA, we called all our guys in and told them to take two weeks off. We told them that we could come back after those two weeks with a plan of attack.”

Kraft believes the NCHSAA did everything it could do.

“They had impossible decisions to make, and I think they did a pretty good job,” he said. “They did their best to try to serve everybody. We expect to find out more from the NCHSAA about the playoff structure in the week ahead. That’s an important part of the equation. You want your guys to have a chance to compete for championships. You want to be able to put up a banner in the gym that never comes down. You want to be able to come back to West when you’re 60 and see that banner.”

Indoor track is the only sport played by Rowan schools that was completely erased from the books. Every other sport faces a condensed season.

The Falcons are still waiting on a green light as far as using their weight room, so most of the workouts are held on the practice field near the famed cornfields. On Thursday, however, the Falcons switched things up and performed drills  in the stadium. They could be a little more creative with the workouts in the stadium.

“September is still going to be about all strength and conditioning stuff for us,” Kraft said. “When October comes, we’ll start incorporating more of the football component.”

While the Falcons have been working in pods limited to 25, they expect to be able to expand to 50 soon.

“That would be our whole varsity squad,” Kraft said. “We’ve got 47 on varsity now, and 30 to 35 on the jayvees. Our numbers are pretty good.”

Kraft said three players have made tremendous strides since fans saw the Falcons last fall — receiver Damon Phillippe, defensive end Ashton Matthews and defensive lineman James Ball, who can play inside or outside.

“We’re looking at it like this is a redshirt year for everyone,” Kraft said. “Our freshmen are going to have the benefit of five months of strength and conditioning workouts, so they’re not going to be like normal freshmen when February gets there. They’ve got an opportunity for tremendous growth. Some young guys have a chance to make a difference,”

Kraft says the Falcons are doing a good job in the classroom. They’re wearing their masks and keeping their distance. They’re doing what they can to ensure that they have a football season.

“We just finished the third week of school,” Kraft said. “But in a lot of ways, with the added stres, it felt like we’ve been going for six weeks.”

Kraft  believes that a football season is essential to getting life back to that sense of normalcy.

He believes football is a great way to keep some kids in school who might otherwise fall by the wayside and run with the wrong crowds.

There aren’t many coaches who don’t share those views.

“I know we haven’t been dealt a great hand with the virus, and it’s not an ideal season that we’re looking at,” Kraft said. “But I also know our guys are looking forward to the season that we can have.”

So the Falcons work out. They get stronger and faster and they look forward to that night when the lights finally come on a Friday night in February.